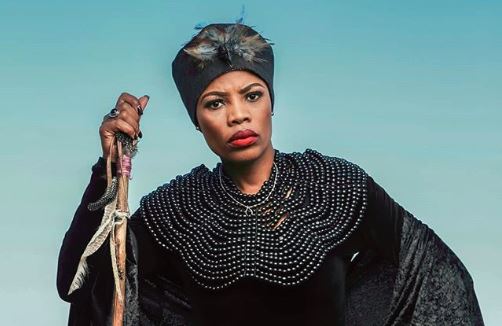 While viewers think they've seen enough witchcraft and liver to last a couple of lifetimes onThe Herd but actress Winnie Ntshaba has revealed that Mamngadi is about to blow things up so much, she's going to need bodyguards. Scary isn't it?

If you have been following the fascinating Mzansi Magic drama series, then you know that right at the centre of the story is Mamngadi and her witchcraft.

Winnie, who is totally knocking the portrayal of Mamngadi out of the park told TshisaLIVE that things are about to get so hectic that she might need protection from all the fans she's set to anger in the coming episodes.

"I love acting because when you are lucky you get to tell the most incredible and even unbelievable stories. Like in reality I'm the furthest thing from being a witch I would never be one but because of stories like The Herd, I am one. And in my portrayal of Mamngadi I hold nothing back. It's so hectic that after the episodes that are coming now I am going to need a bodyguard. Because the things that that woman is going to do... Oh my word people will not like her one bit."

The actress said after being known for years as Khethiwe on Generations she was surprised by the impact Mamngadi has had on viewers.

She said people meet her in the streets and tell her just how much she scares them, while others ignore her and others are just purely mad at her!

"The great thing with acting is that it always offers escape because in that moment you have to totally embody the character. So just because Winnie is totally different from Mamngadi it doesn't mean when she cries I must cry fake tears... it's not possible. Acting allows you to take on a new character and your learn through them."

While TV has been around for quite some time the stories feel real for most viewers and Winnie says that is how it is supposed to be when the job is done properly.

Just ask The Herd viewers how many of them are currently off eating "liver" thanks to Mamngadi.

With a character as complicated and as evil as Mamngadi, Winnie has no choice but expect a few odd looks at the grocery store if she goes ANYWHERE near the liver section... even in real life!

'Being polygamous gives you peace' - Skolopad on becoming the second wife