IN PICTURES | The Lion King fever hits & Mzansi's celebs went all out! 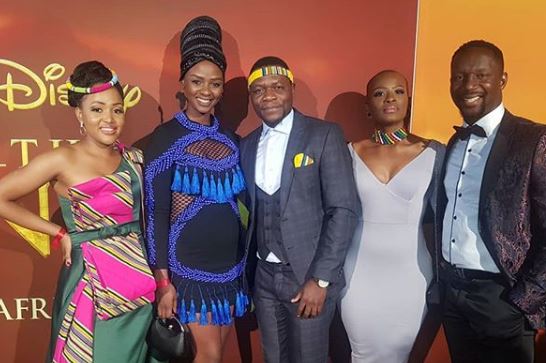 Mzansi's famous faces and fans pulled out all the stops at The Lion King local premiere on Thursday night.

The much-anticipated remake of The Lion King, which will release worldwide on Friday, features Donald Glover as Simba, Beyoncé as Nala, John Kani as Rafiki and James Earl Jones returning as the voice of Mufasa.

It was a feast for the eyes with all the African-inspired outfits.

John Kani and his wife, as well as Lebo M and his family were on the red carpet looking like the superstars they are.

Not only is South Africa super proud of the representation it has in the film, but with Beyoncé's curated album, The Gift, featuring our very own Moonchild Sanelly and Busiswa there's a lot to be excited about!

Check out some of the snaps from the premiere.

Some great moments on the red carpet of #LionKingSA. Watch @CriticalHitNet for the full drop of photos I captured tonight. Will be up tomorrow. pic.twitter.com/5WNhG93Fsr

Thembi Mtshali has a career spanning over two decades!
TshisaLIVE
1 year ago

Money, fam ... it's all about having money and options.
TshisaLIVE
1 year ago
Next Article