What do you think? Mzansi split over Rasta's Richard Maponya painting 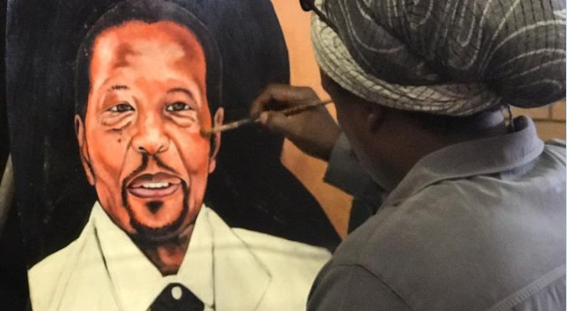 Rasta painted a portrait of Richard Maponya at the businessman's funeral on Tuesday.
Image: @i_malema Twitter

Just when social media users thought Lebani “Rasta” Sirenje and his funeral paintings had been left in 2019, he surfaced at Ntate Richard Maponya's funeral on Tuesday and got the internet all excited.

Rasta was among mourners at the funeral of the influential late Soweto businessman held at the University of Johannesburg Soweto Campus on Tuesday.

Ntate Maponya , who was 99, died last week after a short illness. He was renowned for building a business empire despite apartheid era restrictions.

He was the founding president of the National African Federated Chamber of Commerce and Industry, started in 1964 to serve the interests of small businesses.

Seated in front, Rasta painted a portrait of the influential businessman, deciding to immortalise Ntate Maponya in his white suit.

While social media was flooded with tributes and messages for Ntate Maponya, Rasta's painting also caught the attention of tweeps, and soon he was trending for his work of art.

While some felt he had improved, others felt it was time to call a commission of inquiry into why he always gets the funeral painter tender.

So vhele rasta has a VIP pass to all high profile funerals in the country #RIPRichardMaponya pic.twitter.com/LK8vvlEKUK

Is it just me or Rasta is improving?😬😬😬🙈 #RIPRichardMaponya pic.twitter.com/J80PvnC9cd

Rasta at it again 🙄

Rasta got the tender to paint Ntate Maponya 😭😭😭😭#RIPRichardMaponya pic.twitter.com/ZQsiKveRQV

Lord please grant the rasta s attitude, his spirit is made out of iron. He doesn't have abantu ba zo thini syndrome. pic.twitter.com/EbVYYpIc4G

Looks good. So I’ve concluded Rasta was trolling us with those ugly painting to get our attention. 😆 https://t.co/S0XXcHMYRc

I personally think that Rasta is a great artist and all those botched portraits were done intentionally to get our attention. That was Rasta's #Vision2020 and he's achieved it. #riprichardmaponya pic.twitter.com/7ZCErGz46D

Rasta had some rocky times this year.
TshisaLIVE
2 years ago

'Take away his brushes': Fans not impressed by Rasta’s Neyi Zimu portrait

'Is it too late to take Rasta to drawing school?'
TshisaLIVE
2 years ago

Hold up, fam - that isn't Zozi!
TshisaLIVE
2 years ago