'Take away his brushes': Fans not impressed by Rasta’s Neyi Zimu portrait 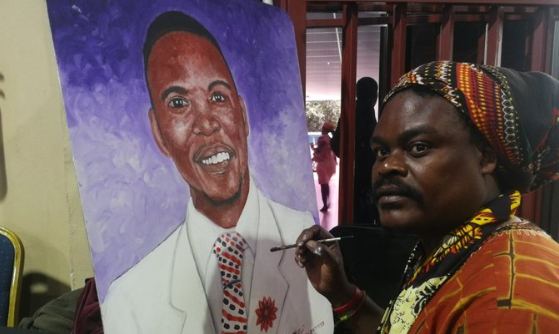 Family, friends and fans gathered at the House of Treasures Ministries church in Rispark, Johannesburg, on Wednesday for the star's funeral service.

Neyi died on December 4 at Busamed Hospital in Modderfontein, Gauteng. He was being treated for a rare blood disorder that affected his skin.

Chief justice Mogoeng Mogoeng and Dr Tumi and Rebecca Malope were among those who took to the stage to pay tribute to Neyi.

Members of the EFF leadership, including Julius Malema, Mbuyiseni Ndlozi and Godrich Gardee were also in attendance.

As pictures from the funeral filled social media timelines, snaps of Rasta painting a portrait of Neyi soon dominated.

Some social media users said it did not resemble Neyi, while others begged someone to take Rasta's brushes away.

#NeyiZimu Rasta at it again 🤣 somebody please take the brushes 🤣 pic.twitter.com/IbUOIx0YGo

I guess Rasta draws the inner person. The soul 🤔🤷🏽‍♀️

Guess who's at the #NeyiZimu's funeral... The Rasta we know and appreciate... He said he started the Portrait of #NeyiZimu yesterday... He's doing the final touch up the funeral service gets underway... pic.twitter.com/zckEQoxv0k

Rasta should be in prison 😳😳

it is late to take Rasta to drawing school?

Bit work of Rasta must not Crossover to 2020 haa #NeyiZimu pic.twitter.com/rV3hmcH3Xb

#NeyiZimu #ripneyzimu
Can someone plse stop Rasta. I mean now its too much and it is a funeral. Can he just pray and give flowers to the family instead of this😠😠😠😠 pic.twitter.com/L60XDzIWcJ

But Rasta will never get it right. The guy is apparently #NeyiZimu

On my darkest days he was on repeat: Hulisani Ravele distraught about Neyi Zimu’s death

"it was as if he himself sat in that darkness with me and ministered to me that there would be better days."
TshisaLIVE
1 year ago

Hold up, fam - that isn't Zozi!
TshisaLIVE
1 year ago
Next Article