Thickleeyonce won over her 'crush' Ndumiso of Black Diamond 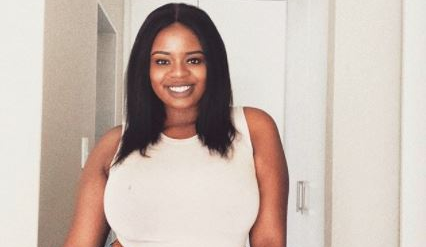 One of the cutest interactions on Twitter took place on Thursday night after Thickleeyonce confessed she has a huge crush on one half of the Blaq Diamond duo, Ndumiso Mdletshe, and proceeded to shoot her shot.

Thickleeyonce could no longer keep her crush to herself, and decided to share with her followers.

"Why do I have a crush on Blaq Diamond? Send help," she said.

She first had to clarify which member of Blaq Diamond she was crushing on because, like many other peeps, she thought Blaq Diamond was one guy. Kante, there's two guys, namely Ndumiso and Sphelele Dunywa.

"Kante, it’s two people. Why didn’t I know this?  I was wondering why the other guy is always with him. I thought it was his bestie. My bad,  I have a crush on the one with the locks. He’s cute," she clarified.

The gorgeous plus-size model and influencer might have been joking, but one thing led to another and before she knew it, her crush was tagged.

As soon as Blaq Diamond was tagged, he showed up. And by the way he responded, tweeps knew Thicklee's shot had hit the spot.

It turns out Blaq Diamond, erm, "likes" them thick...

Tweeps had to hold themselves back to stop from planning a wedding. The general consensus is that sis now has a very public licence to slide into the DMs, so tweeps encouraged her to do the right thing.

She will probs have to act fast because just moments after Blaq Diamond acknowledged Thickleeyonce, other girls were already jumping in.

Sis what are doing? 😭😭 let me flourish please 😂

Twitter is here for this pairing. So go get your man, sis, and don't forget to share the deets once y'all make it official.

Levels! Thickleeyonce has made it on Rihanna's Savage x Fenty influencer list

'I love to align my brand with brands that manufacture sizes that are for small and plus-sized women.'
TshisaLIVE
1 year ago

The inequality in SA left Thickleeyonce heartbroken
TshisaLIVE
1 year ago

"Reminder: being fat doesn’t make you ugly - a heart full of hate does."
TshisaLIVE
1 year ago