'Imagine people covering a story of your loved one being painted by this guy, but he is busy painting the wrong person intentionally' 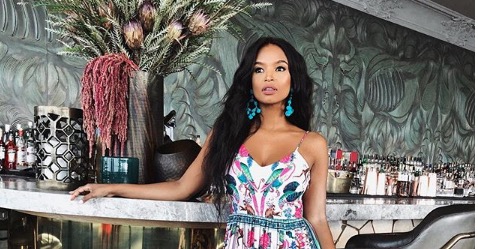 Ayanda Thabethe has joined other celebs and Twitter users questioning why controversial funeral painter Lebani “Rasta” Sirenje gets so much attention when the country has other talented artists.

Rasta grabbed his crayons and headed to late TV and radio star Bob Mabena's home this weekend to paint a portrait of the star ahead of his funeral on Saturday.

#BobMabena #Newzroom405
The famous Rasta outside the late Bob Mabena's home, paying his last respects with a portrait. @Newzroom405 pic.twitter.com/1KVbfnilAe

The internet was soon flooded with images and videos of his painting.

As users weighed in on the portrait, Ayanda made it clear she was gatvol of always seeing Rasta get coverage when many other talented artists were ignored.

“I hate that they keep covering this guy and giving him airtime. We have so many talented artists who are serious about their craft and not these gimmicks,” she said.

The actress and TV personality said it was “annoying” to always see Rasta, and hit back at claims that he was just working hard to stay relevant.

“Imagine people covering a story of your loved one being painted by this guy, but he is busy painting the wrong person intentionally. Argh, he irritates me.”

TV personality Claire Mawisa felt the same way and said “Rasta should no longer be allowed near funerals.”

“It's become a running joke in this country. The attention he gets from media, as a side show to the main event, is starting to feel insensitive for those who are grieving.”

Actress Zenande Mfenyana made it known that she did not want Rasta at her funeral, and  Portia Gumede said Rasta should keep his crayons away from her.

Please mark this tweet. The day of my funeral, please may I kindly not be sketched by Rasta. Ka hlompho please 🙏🏽

May I never be famous to a point that Rasta has to sketch me. Am too pretty for his crayons.

Rasta is getting all the praise on his painting of Andrew Mlangeni.
News
8 months ago

Rasta is trying again with his Lerato K portrait, and the internet is shaking

Rasta the artist tries his hand at improving Lerato K portrait and the internet laughs again.
TshisaLIVE
8 months ago