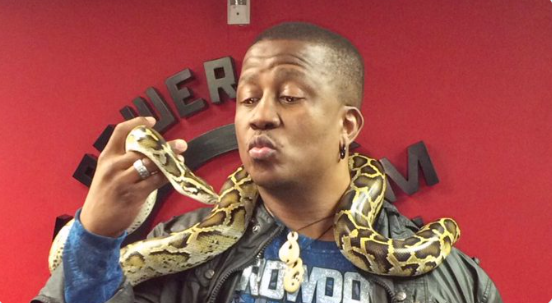 DJ fresh cheekily posted a picture of himself with a snake after Jackie's claims.
Image: Via DJ Fresh Twitter.

Metro FM DJ Pearl Modiadie has joined several other celebs in poking fun at claims that some of Mzansi's most famous use “dark magic” to achieve their success.

Award-winning author Jackie Phamotse had the streets in a mess this week when she accused some in the entertainment industry of using “snakes” and “witchcraft” to get ahead.

“But behind that facade, there are four or five men who are funding this. They are consistently going to sangomas, they are consistently changing friends because the more the friends know, the trickier it becomes,” Jackie told her followers in an an IGTV Live video.

While many were taken aback by the claims, Pearl took to Twitter to post a snap of herself with a snake around her neck.

“What's this about snakes?" she asked.

She reassured fans that it was a throwback snap of her on a trip to Bali three years ago, and then deleted the posts.

I just couldn’t resist everyone being up in arms about this!

DJ Fresh also joined in the fun, posting a pic of himself holding a snake. Rapper Cassper Nyovest shared a throwback video of his bestie Carpo freaking out while holding a snake.

Reality show star TT Mbha couldn't resist posting a snap of his own adventures with a snake.

Wait, what? Jackie Phamotse believes your faves use "black magic" to get their riches!
TshisaLIVE
1 year ago

"So, it's quite an honour to be the first one to receive this award especially from a self-publishing point of view"
TshisaLIVE
1 year ago

Jackie Phamotse shook by pregnancy questions from strangers: It’s so rude to even ask

"Guys I’m not pregnant! Yes, I share so much but come on. My womb is still my business," she said.
TshisaLIVE
1 year ago