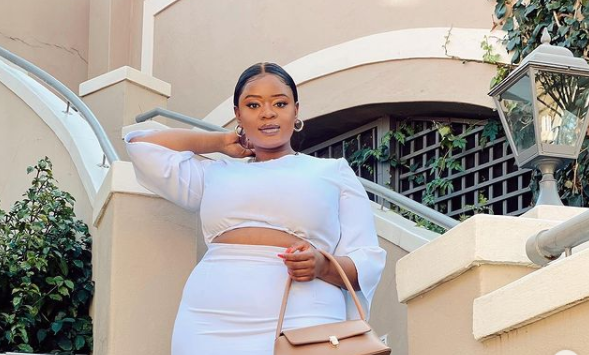 Model Thickleeyonce and many other Mzansi celebs had a good laugh over the viral video.
Image: Instagram/Thickleeyonce

Some of Mzansi's biggest names joined thousands others in poking fun at an NBC Nambia news reporter's on-air hiccup, which has since gone viral.

In a video which has been widely circulated on social media, NBC news presenter Elmarie Kapunda can be seen handing over to her colleague and sports presenter, Jessicah Kaimu.

After the handover seemingly didn't go according to plan, Jessicah can be heard schooling her colleague live on-air.

A third person off-screen could be heard reminding the presenter that the presentation was live.

“Jessicah, we are live,” said the person.

NBC confirmed to TimesLIVE the incident took place on Wednesday evening between the presenters, but said it had no further comment.

The video swiftly made the rounds on social media with 'Jessica' topping the Twitter trends list, entertaining tweeps across the globe.

It also had the memes streaming in with some of Mzansi's celebs, including Thickleeyonce, Mihlali N, Thuso Mbedu and Mel Bala weighing in on the moemish.

Though many exclaimed 'Bathong Jessica' upon discovering the video, some weighed in on the debate about whether the sports news reporter should keep her job.

Media personality Sizwe Dhlomo hit back, saying that Jessica's moemish is likely to be raking in the cash.

“F*** that, Jessica stays! These will be the highest online figures they’ve had in months!” said Sizwe.

“This will never not be funny, no ways,” wrote Thickleeyonce.

Check out the reactions:

“We talked about this in the pre-production meeting. I’m not doing that shit. OK!?” https://t.co/ln05z6mmPa

F that, Jessica stays! These will be the highest online figures they’ve had in months! https://t.co/cZV2WiKqO7

Namibia, what is this? Why is Jessica gatvol? What did you do to Jessica? 🤔🤣 https://t.co/mXcZpbrzuI

They don’t get along https://t.co/t8eFxdzwLf

Mzansi's famous faces weighed in on the split.
TshisaLIVE
1 year ago

"The one we all saw was guilty is now 'officially' found guilty! More to justice!"
TshisaLIVE
1 year ago