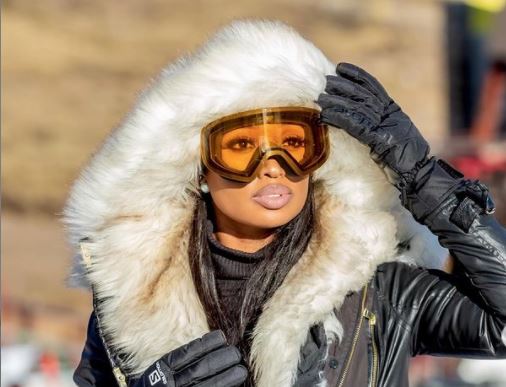 Former Muvhango actress Phuti Khomo has become the unofficial face of “soft life” as far as her fans are concerned and her latest luxurious birthday getaway in the snowy mountains of Lesotho cemented her position as the “queen” of soft life.

Phuti recently turned 37 and to celebrate the trip around the sun, the former beauty queen took her favourite girls with her on vacation where only the finer things in life were on offer.

The former Miss Teen SA and her squad, which consisted of her sister Jacquie Khomo and her friend and actress Uyanda Mbuli, crossed the border into Lesotho where they experienced true winter in mountainous and snowy country.

The women enjoyed skiing and other fun activities at Afriski Mountain Resort; along with good food, drinks and company.

The trio looked like they had the time of their lives and they sure looked stunning in the snaps that they shared. Fans were obvs going through a collective SBWL moment but if the comment section on Instagram is anything to go by, they sure do love the soft life for Phuti and her squad.

Even though she spends most of her time under the radar — except when she pops up on Instagram looking stunning enough to remind her fans that she always slays — Phuti recently shared a cute moment with her fans.

Phuti was recently reduced to tears when her man surprised her with a truck for her birthday.

In a video shared on Instagram, the actress was driven out to an unknown location wearing a blindfold.

When Phuti reached the location she was confused as the truck she owns was parked there. A few minutes later a second truck decked out with balloons pulled up next to hers, and it was revealed her man had surprised her with a new truck for her business.

“To have someone love you enough to support you in every way, including your dreams, is very rare. I honestly never thought he would actually do it. He knew I needed another truck, and I kept asking for one of his, to which he kept saying, ‘Maybe God will bless you one day’. Little did I know God was already working in my favour as I was asking,” she said of the moment.

Phuti went on to thank everyone involved in making the surprise so memorable.

WATCH | Actress Phuti Khomo’s hubby bought her a truck for her birthday!

Phuti Khomo was surprised with a truck to add to her fleet.
TshisaLIVE
3 months ago

Phuti Khomo: The industry is filled with chancers and exploitation