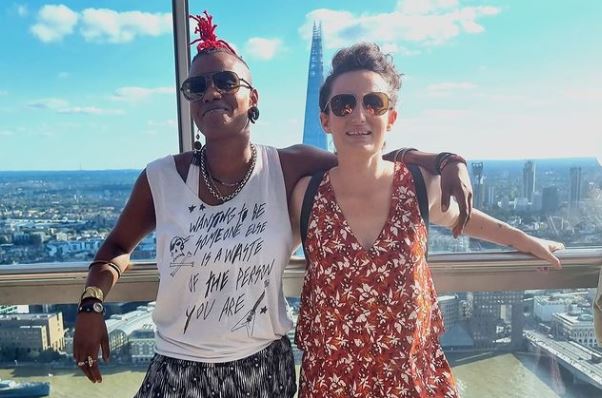 Toya and her boo Ally are engaged to be married.
Image: Instagram/Ally Sdi

Congratulations are in order for musician Toya Delazy and her girlfriend Alisson “Ally” Chaig, who have shared the news that they are engaged and well on their way to becoming “Mrs and Mrs”.

Toya took to her social media to share her happy news.

“I gotta share my joy as we celebrating our Tin Aluminum Anniversary with my babe.  A decade of love.”

S I V U K I L E & livumile💍 pic.twitter.com/whuXqbuk4W

Ally posted the same snap on her Instagram with the caption, “Mrs and Mrs”.

To which a smitten Toya replied with “I can't wait to say I do , cause I beeeeen” in the comment section.

Ally is more than just Toya's bae, she represents Toya and is part of the team that ensures that her music travels the world and her brand remains relevant.

The pair have been together for ten years and while Toya lived between SA and the UK for a while in their relationship, she's now based in the UK.

Toya is also the granddaughter of SA politician Mangosuthu Buthelezi and has royal blood running through her veins. Her great-great-grandfather was Zulu king Dinuzulu kaCetshwayo, making her a princess.

She has had to defend herself against internet trolls because of who she is.

The star recently took to Twitter with an open letter to her fans about all the hate they throw her way.

“It’s shocking how my mere presence triggers so many people. My mere existence, my choices. Then I wonder ‘Why do I count if I am so lame’. Nenzani ekhaya? (What are you doing at home?” she asked.

The star has aired her views on leadership.
TshisaLIVE
11 months ago

"Looking down on your relatives who speak your native tongue because you speak perfect English is stupid. It's like being proud of borrowed clothes."
TshisaLIVE
11 months ago

"I'm not sure why my existence triggers them so much. Because I'm a black queen woman? Beause I was born a royal?"
TshisaLIVE
1 year ago