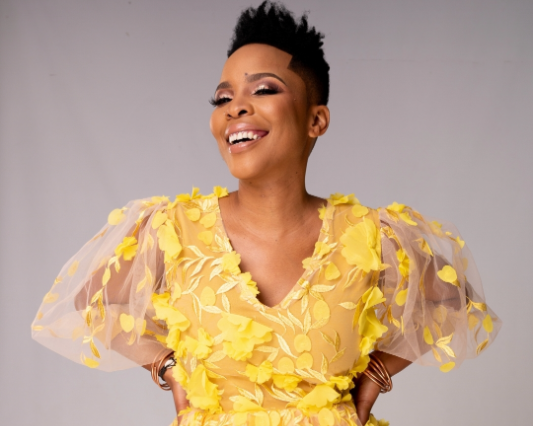 Masechaba Khumalo said her purpose and calling in life has always been about uplifting and developing people.
Image: Supplied

We know Masechaba Khumalo as a seasoned broadcaster and spokesperson for the department of arts and culture. She recently pulled a new trick out of her sleeve when she released a single called Vela featuring music duo The Real Landlordz.

She said the apple did not fall far from the tree, and it was not planned.

“I never planned on becoming a singer or singing professionally. It never dawned on me but in the same way radio and television found me, music st found me and the bug bit and here we are.”

“When I was at Metro FM hosting the drive with Mo Flava I used to sing at the end of every song., I just found myself singing along and then Mo would do this thing where he would turn  down the volume and people started saying I had a beautiful voice.”

She said Mo Flava set the wheels in motion when he asked for producers who wanted to work with her to come forward. Several producers reached out and she chose music producer and house DJ Mobi Dixon.

“My heart was set on Mobi Dixon and the interesting thing is that I've never even been a traditional house fan, I'm into more soulful house so that's why he appealed to me the most. I decided I'm going to go into studio with Mobi Dixon. Guess what? When studio time came I cancelled and came up with excuses and I was scared to get into the studio.”

She said when she finally realised she had nothing to lose she went for it.

“This was the first song I was ever featured on which was on Mobi Dixon's album called When House Was House. The song is called Mvelinqangi and interestingly  its also a spiritual song even though it's a house song. It wasn't a write-up song. It was a freestyle. I'm a writer by profession but I've never written a song. I would just go into studio and be led by the Spirit.”

Masechaba said she was approached by The real LandLordz at a conference  and the rest is history.

She said creating Vela was a form of highest expression.

“I did not think about genre, positioning or presentation. I literally went into the studio to record music for myself and to fulfil my desire, my passion and to live my highest expression. It was for me and what came out is something we are all proud of. There was never any consideration  about how this was going to fit with current trends. The song is not on trend . It's not amapiano, it's not kwaito or hip-hop. Tts really a classical and more orchestral song. It's a timeless song, which is a beautiful thing.”

Vela is a conversation between Masechaba and God where she asked God to reveal themselves after the many tragedies people have endured.

“One thing I've realised is that everything I do, and everything I've ever done has always been purpose-driven. When you look at my profile and history professionally and personally, everything I've ever touched has had to do somehow with my calling on this planet. From television shows you would know that I'm not an entertainment presenter.  I've never presented anything focused on entertainment, edutainment maybe but all the shows that I've ever done have always been a developmental or had a purpose to empower, uplift, educate in some shape or form."

K.O chats about new single 'Emoyeni', his sound and legacy in SA hip-hop

"I've always known what I wanted to put out there and how I wanted to come across. And as far as where I think hip-hop is supposed to go, I can only ...
TshisaLIVE
3 months ago

Kelly is preparing for her Gospel Explosion concert at Lyric Theatre on April 15.
TshisaLIVE
3 months ago

"I'm not changing. I'm not shying away from being a singer. It’s just that the inner person of Afrotraction is a producer so I want to start showing ...
TshisaLIVE
6 months ago

'It's my proudest work to date,' says Brian Temba on why his latest album is fire

"I needed to hear what I used to hear when I was a kid that's why it's closer to my heart because it's something I longed for."
TshisaLIVE
5 months ago