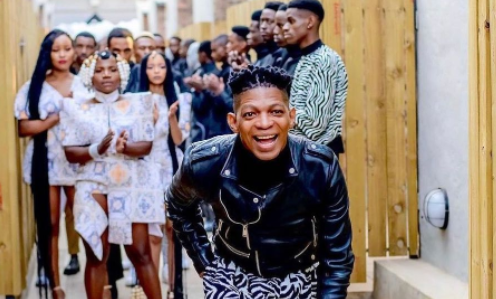 The international fashion designer died on Sunday after losing his battle against cancer.

The family confirmed the tragic news in a statement shared with TshisaLIVE.

“It is with profound regret and sadness that the Kekana family confirm the untimely passing of international fashion designer, son, father and brother Lebogang Quiteria Kekana, 38, after a short battle with cancer. Quiteria sadly passed away on April 17 2022 at his Melville home.”

Quiteria Kekana died on April 17 2022 at his Melville home.
TshisaLIVE
2 months ago

The funeral is set to take place at Parkhurst Recreational Centre and will also be available virtually.

During the candlelight ceremony Quiteria was remembered as an ambitious and prayerful spirit who was a trailblazer and always went for his dreamst.

After falling in love with dance and the lifestyle in Johannesburg while attending school, Quiteria did ballroom dance, then studied dance at the National School of the Arts and briefly did human resources.

With his mother Violet's eye for fashion, he began creating clothes for himself and close friends Quiteria knew fashion was his first and true love.

He then partnered with George Malelu, which was the beginning of  Quiteria & George and catapulted their brands to Milan, Paris and Germany.

One of the mostfamous moments in his career was when he dressed Beyoncé for the Global Citizen concert, which marked a moment he had been working towards.

In 2018 Quiteria embarked on a solo career where he started Quiteria Milier. He opened his design studio in Melville dressing A-list stars including actress Katlego Danke, singer Makhadzi, actor Khaya Dlala and many others.

His solo career saw him travel in and beyond the continent, fom Paris to Nigeria, Tanzania, Malawi and Botswana, to name a few.

Singer Makhadzi was among the many celebs who sent tributes after hearing the tragic news.

Quiteria Kekana died on April 17 2022 at his Melville home.
TshisaLIVE
2 months ago

From Paris to Beyoncé: Five things to know about renowned designer Quiteria

A look at the career and personal life of the beloved fashion icon.
Lifestyle
2 months ago

A candlelit ceremony at Quiteria Atelier studios in Melville is set to take place in his honour on Wednesday evening.
TshisaLIVE
2 months ago