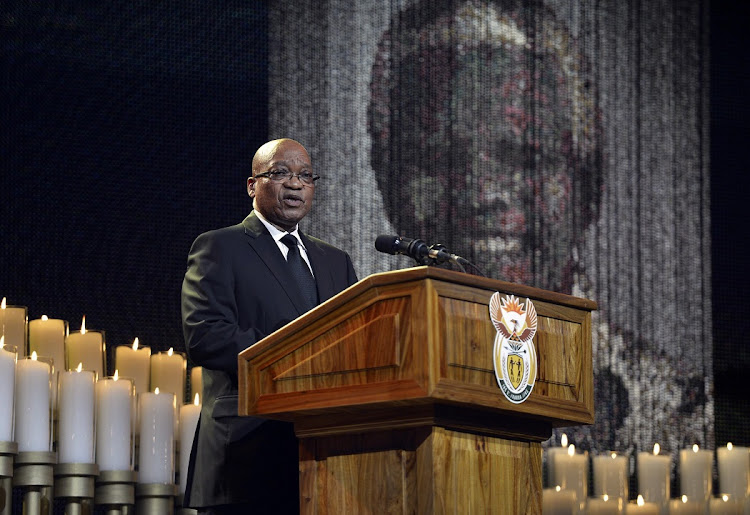 OPPOSING STYLES: Nelson Mandela was a selfless leader who put his country first. Jacob Zuma is nothing if not self-serving. File photo.
Image: Reuters

Nelson Mandela was born last week 99 years ago, when the telegraph was the means of mass communication. But much of the commemoration of his July 18 birthdaywas in cyberspace across social media platforms.

One such meme sent to me on the birthday, appropriately encased in a black border, bore the legend: “It ’s little use having 1 Mandela day and 364 Zuma days.”

Undeterred by any such unflattering comparisons – and perhaps providing the nodwhich vice accords to virtue — Jacob Zuma enthused on but one aspect of Mandela’s storied life.

Warming to his theme of the indissolubility of the icon from the tarnished party bannerwhich Zuma now holds aloft, he warned: “Even some racist and most backward andreactionary formations claim to represent Madiba ’s ideals.”

The TimesLIVE reporter helpfully decoded the latter reference to be to the DA. One might on occasion, other than the official opposition offering themselves as a DietCoke version of the real-deal ANC – or the ruling party minus corruption — question the wisdom of the DA always lashing itself to the Madiba mast.

But of course Zuma, who knew Mandela far better and more close up than most, wouldknow — if he had a moment of honest reflection — that the version of Mandela he offered up in Empangeni last week was deeply selective and thoroughly self-serving.

Two years ago, just after the great man’s death, I was researching a book I wrote onencounters with him viewed through the lens of his opponents. I thought no single observation of him better encapsulated his leadership example than the words of American poet Walt Whitman.

Zuma might indeed have a point on the impossibility of attempts to sever Mandela from the ANC. But there are many counterpoints, on critical matters and at significant moments in this country’s transition from apartheid to democracy and afterward, when Mandela set his face against the movement.

And the ‘Every Man for Himself’ award on Zuma’s sinking ship goes to...

US President Donald Trump has strong local competition for the award that columnist David Brooks recently bestowed on him.
Opinion & Analysis
5 years ago

Mandela ’s great lessons are a reminder that often leadership means adjusting tactics and using high office to set a profound example and go against the grain of popular opinion or the easy options.

His early negotiations with his apartheid captors while still imprisoned by them, done without the initial approval of his party in exile, is perhaps the first example. Standing up at Kings Park Stadium, at the height of the violence wracking KZN, and telling his supporters to “throw your pangas into the sea” would be a second.

A third would be his moment of truth when he advised his party executive awaiting the election results to be prepared to lose both KZN and Western Cape and refusing to declare the 1994 election not “free and fair” ( though there was strong evidence of poll-rigging).

Appointing first a National Party businessman and then a non-partisan banker as hisfirst two ministers of finance would be another. Calling a press conference at his hometo announce that the government he led would honour the first Constitutional Court judgment to rule against it is another footnote in a long chapter of his leadership from the front.

His close Robben Island confidant Mac Maharaj summed up the Mandela of the constitutional negotiations in a way which captured the essence of his leadership — which went beyond party labels but fixated on core beliefs and convictions.

Maharaj wrote: “His many zigzags were always leading to the same object. When Iwent to see him (from the negotiating chamber) he would always ask: ‘Where does thistake us towards majority rule? How long will it take ? ’ He was my compass through all the talks. The Nats [National Party] had no compass; in the end they were preoccupied with their selfish interests.”

Note that Mandela never asked: “Will this make me president?” Or: “How will we winoffice ? ” He had a core of beliefs and a country worth fighting for.

He led as he spoke, putting the country first.

Those who lead us today, alas, conform far more in chilling ways to the “selfish interests” which in Maharaj’s view did in the National Party. Perhaps the candidates who today jostle for the tarnished Zuma crown once worn resplendently by Mandela shouldremember what happened to the once mighty National Party.

If President Jacob Zuma holds the title as South Africa's ultimate political survivor, the first runner-up has to be Sello Julius Malema.
News
5 years ago

Deputy President Cyril Ramaphosa is leading the race to succeed President Jacob Zuma five months before the ANC elects new leaders, but does not have ...
News
5 years ago

Nkandla residents who think they have President Jacob Zuma as a neighbour best think again. The truth is‚ he's going to Dubai.
Politics
5 years ago

Instead of pointing a finger at Zuma's betrayal, Nzimande should maybe concern himself with the duplicity of the SACP
Opinion & Analysis
5 years ago