But presidential gallop will not be a two-horse race 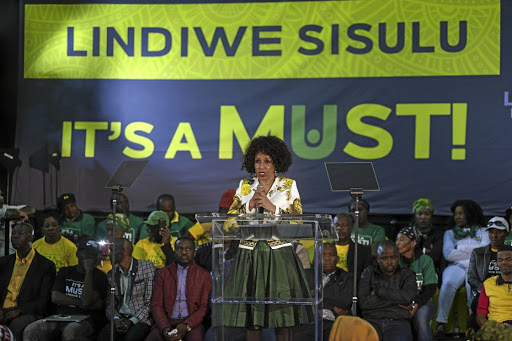 Lindiwe Sisulu speaks at Walter Sisulu Square in Kliptown, Soweto, against the backdrop of one of her campaign slogans. Picture: Ihsaan Haffejee

Deputy President Cyril Ramaphosa is leading the race to succeed President Jacob Zuma five months before the ANC elects new leaders, but does not have an outright majority.

This is according to a survey by a reputable polling company, Plus 94, which interviewed 2400 people, half of whom were card-carrying ANC members.

The poll revealed that Ramaphosa could get 42.6% support if an election were held tomorrow. His rival, former AU Commission chairwoman Nkosazana Dlamini-Zuma, scored 21.4%.

ANC dissidents have a 'duty' to save the party

There would be a strong case to "justify and defend" the defiance of ANC decisions if it was aimed at rescuing the party from disaster.
News
4 years ago

Human Settlements Minister Lindiwe Sisulu came third with 7% although she had not declared her availability at the time of the survey last month. She declared her intention last week.

The survey results come as presidential hopefuls have started their public campaigns. Sisulu broke with party tradition when she launched her manifesto yesterday at Walter Sisulu Square in Kliptown, Soweto.

Her campaign included large banners bearing the faces of Nelson Mandela, OR Tambo and Walter Sisulu, with the slogan: "They didn't struggle for this. Let's recapture the right part".

Hundreds of supporters attended and were handed T-shirts reading "It's a must: Lindiwe Sisulu", and bumper stickers with the same message.

Sisulu defended the break with the ANC tradition of subdued campaigning, saying: "Times are changing. It's not my campaign, it's my campaigners' campaign. If and when I become president of the ANC, it will become my campaign leading up to 2019." 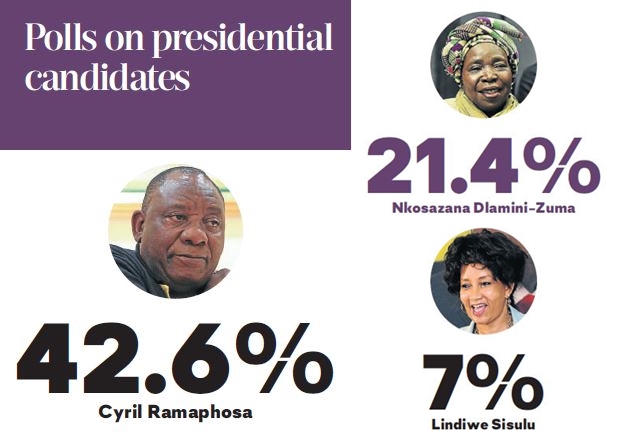 The survey was commissioned by Sisulu's lobbyists, who have been testing the waters for her candidature. The Sunday Times understands a team has been working on her campaign for at least two years.

One of her lobbyists said the survey outcome was a positive development. "It shows that it's not a two-horse race. We have a lot of time between now and December," said the lobbyist, who asked not to be named.

Also on the survey's list of candidates were National Assembly Speaker Baleka Mbete, ANC treasurer-general Zweli Mkhize and his predecessor, Mathews Phosa - all of whom polled less than 7%.

The poll may not be an accurate indication of how ANC delegates would vote in December, but it shows that the race is wide open as no leader has an absolute majority.

The poll also revealed that nearly a third of card-carrying ANC members believed that "South Africa is in need of a revolution".

Some 29.3% of the polled card-carrying members indicated that "people like themselves would not vote, as voting would not achieve anything".

The survey showed that ANC members' confidence in the party had "declined markedly due to the perceived betrayal by leaders of the party's values".

Only 11% of ANC members polled indicated that they were "relaxed" about the state of the party.

In more bad news for the party, 23.2% of members blamed the ANC government for the "negative situation in South Africa" and 15.5% blamed President Jacob Zuma. About 16% blamed poverty and a lack of education for the malaise.

But it is the indication that it may not obtain a clear majority in the 2019 general elections that should worry the ANC.

The ANC wants the state to fork out additional funds for political parties because the regulation of funding may scare off donors.
News
4 years ago

This was hardly surprising as 55.4% of members of the public "did not regard President Jacob Zuma with respect", and 30.8% blamed him, and 31.5% blamed the ANC-led government, for the negative sentiment in the country.

Political analyst Somadoda Fikeni said that although the poll might be a reflection of the state of the succession race now, a lot could happen in the five months before the elective conference.

"The results certainly open up all sorts of opportunities for talks between different factions," he said.

"With regards to Lindiwe Sisulu, she may experience a climb in her support because she is not a person who has been mired in controversy, and the fact that she comes from a family with a proven pedigree will also count in her favour."