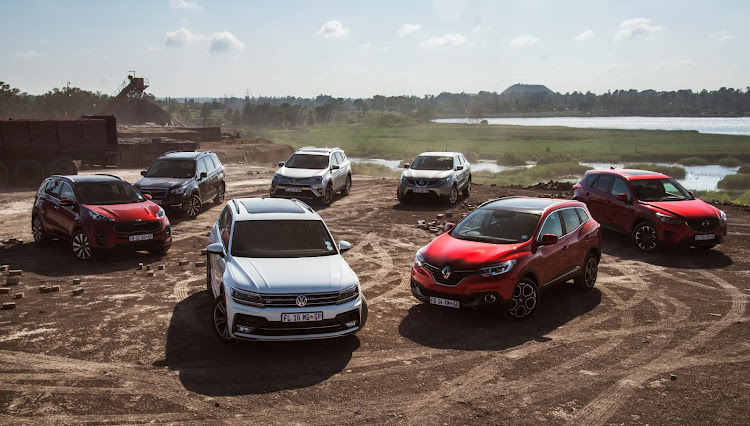 These were the seven top medium-sized SUVs to have back in 2016.
Image: Henrie Snyman

Join us as we take a gander at some of our automotive endeavours from days gone by. This week, the time machine shifts us to November 27 2016, when we took seven medium-sized sport-utility vehicles on a journey that ended at a construction site in the East Rand of Johannesburg. We are still trying to get the dust out of certain crevices in 2020.

The terms “crossover” and “sport-utility vehicle” are debatable in the cases of certain models claiming to party in those camps. Manufacturers appear to have been carried away by a mandate to build cars that blur the lines between niches.

And yet the ambiguity of a product that is no more than a hatchback with a pseudo-rugged persona does not deter consumers. Such offerings sell in droves, as the monthly sales charts will attest. To be fair, the category we are investigating this month has a little more definition than the simplistic view asserted in the second-last sentence. They genuinely do proffer the spaciousness of a family hatchback, the versatility of an estate car and the robustness of an off-roading machine.

The last virtue is perhaps truer for some than for others. But the crux is that the seven models posing across these pages embody the qualities that modern families would look for in a vehicle. This medium-sized sport-utility vehicle ambit is more competitive than it has ever been, with an offering from virtually every noteworthy manufacturer. A perfect season then, in which to conduct a closer evaluation. We assembled all the eminent players in this field, save for the Hyundai Tucson, whose custodians ignored our request for a unit. 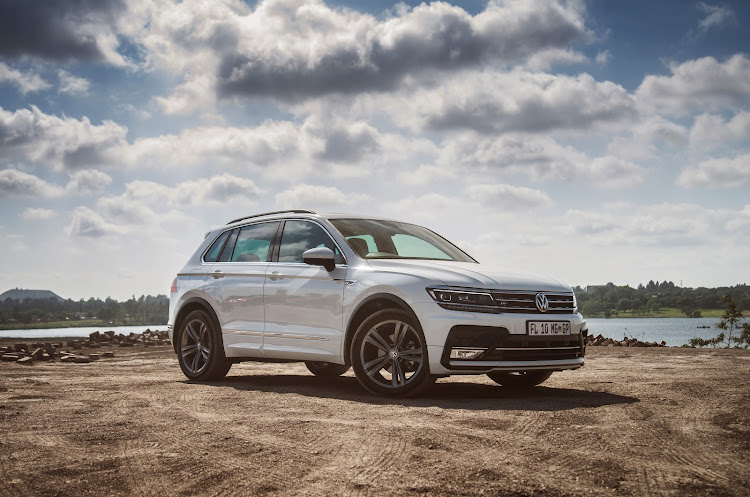 The malaise of an emissions scandal did little to shake faith in the Volkswagen brand locally. Certainly, our slack legislation plays a great role in the diminished relevance of the matter. And arrivals such as the latest Tiguan also helped people forget.

Jibes aside, the newcomer was lauded as a leap when compared to the old model. Particularly in the aspect of packaging: this version successfully addresses criticisms of a small luggage compartment. Being underpinned by the unflappable Volkswagen Group MQB platform means that ride and handling characteristics are outstanding. 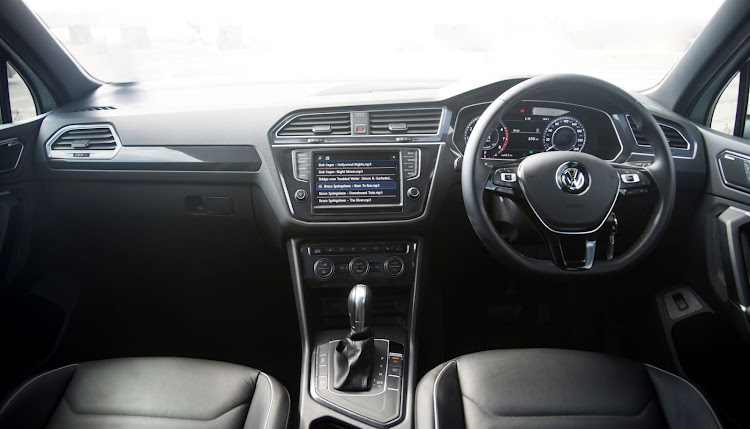 The interior of the Volkswagen Tiguan.
Image: Henrie Snyman

Larger alternatives with premium emblems could learn a thing or two from the Tiguan. And this is not compromised even if one opts for the striking R-Line package, which adds larger wheels among other cosmetic niceties. This is certainly an option to tick, as the Tiguan looks unremarkable without it.

Also noteworthy is the tactile quality of the interior: upscale materials abound – and the ambience is one of plushness. But as with all Teutonic cars, one ought to exercise restraint with the optional kit, or risk a rather fearsome total price.

The Kia Sportage lays claim to being the newest in this company. Its third-generation predecessor was undoubtedly one of the products that helped the South Korean carmaker transform its image. Meagre brand equity is certainly no longer something that plagues Kia and the manufacturer easily contends with the best of them.

The importance of intriguing styling cannot be underestimated in this segment. And the Sportage delivers, with dazzling cues and a silhouette akin to the shape of a racing helmet. That will earn it points in the parking lot contest. But how does it rank in other regards? In terms of road manners, there is little criticism to be levelled at the striking Kia. 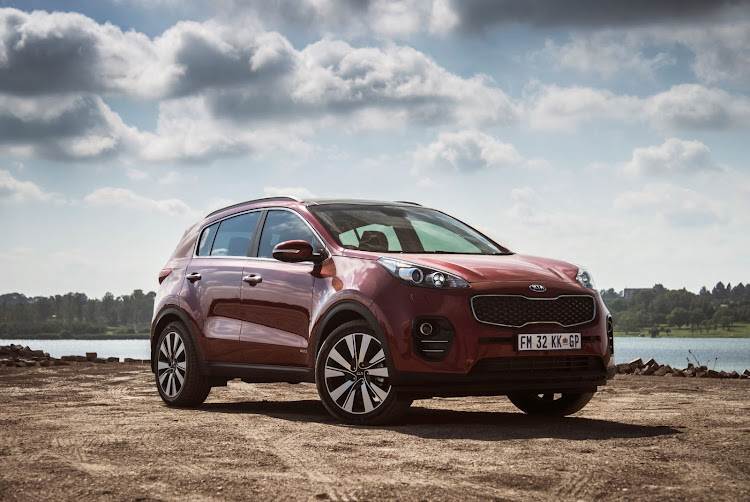 You could say that the overall experience errs on the dynamic side, with a taut and composed feel. This impression is cemented by a tucked-in seating position; giving the sense that you are inside rather than on top. We were a tad disappointed by some cabin appointments, however.

Sneakily, the interior decorators employed coarse materials on the lower parts of the fascia. The top of the dashboard is finished in what looks like leather stitching, but touching it reveals a clever, plastic illusion. Admittedly, those are small shortcomings in what is otherwise a well-sorted package. 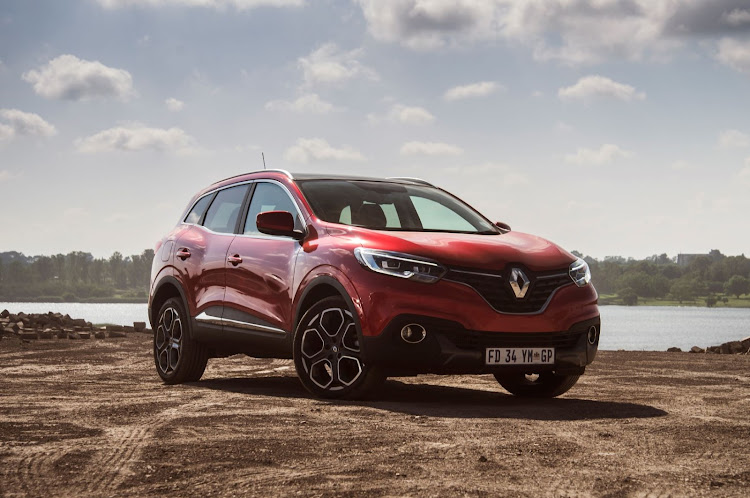 The Renault Kadjar is good, not great

Previous attempts at the genre from Renault are perhaps best forgotten. The Koleos did little to captivate the hearts and wallets of shoppers. Although fortunes appear to be more positive with the Kadjar.

And while it owes most of its constitution to the Nissan Qashqai, the French brand has done enough to disguise the mundanity of an automotive joint venture. It is closer to a Nissan X-Trail from a size perspective. Much like the Kia Sportage, it rates highly on the style scale. This is an attractive car from most angles. And it is bound to strike a chord with the fashion-forward sensibilities of a more urban consumer. 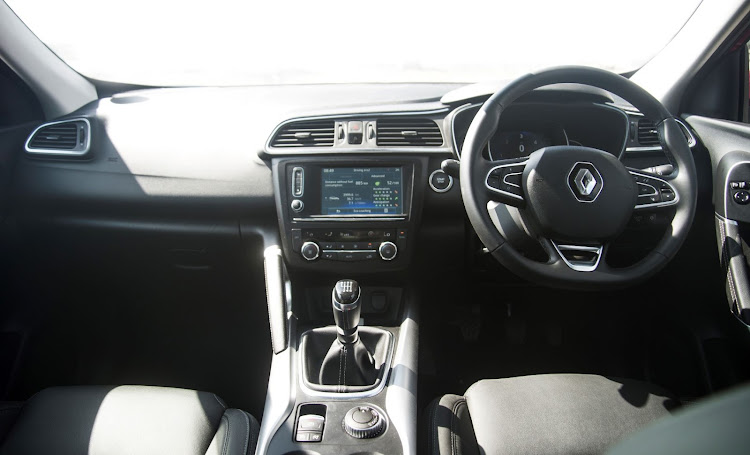 The interior of the Renault Kadjar.
Image: Henrie Snyman

One also appreciates the liberal use of premium materials on the inside, achieving a truly upmarket feel. But apart from these praises, we cannot say with conviction that there is much else outstanding about the Kadjar. Critically, there is room for improvement in the ride quality stakes: the Kadjar does not sail over imperfections with the same nonchalance as some of the other peers here.

It might just tick the boxes in most regards: the Kadjar is good, if not great. But perhaps this middle-of-the-road character gives away its status as a product born to merely fill a gap in the Renault line-up.

About as much fun as a household appliance

Nissan may have stagnated from a new product perspective in times of late. But we cannot forget that the Qashqai pioneered this segment when it was released in 2006. It proved hugely popular and the current generation product continues to build on this success. As a rational purchase, there are many merits that would appeal to the left side of the brain.

Sound value is among them; as the Qashqai is the least expensive offering in this company. There are no obvious idiosyncrasies to this vehicle; it functions as it ought to, with the clinical efficiency of a household appliance. Therein lies the rub. 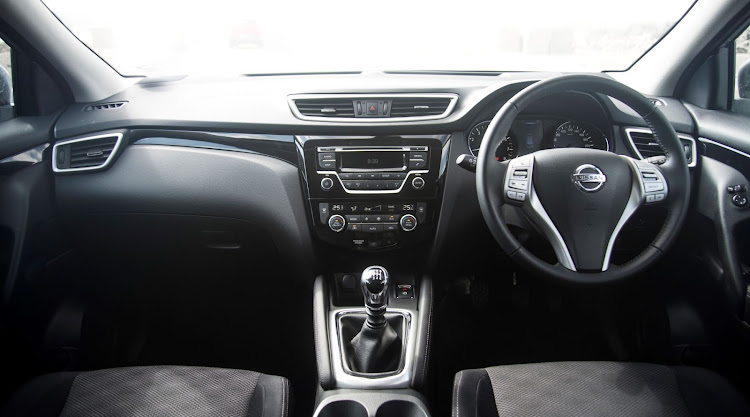 The interior of the Nissan Qashqai.
Image: Henrie Snyman

For families wanting a little more personality and character from their daily chariot, other products might hold greater appeal. Perhaps the Kadjar would sway your vote, since it is essentially the same vehicle, albeit in a sexier frock. We are contrite for bashing the pragmatic, but staid personality of the Qashqai.

The recipe inspired many other carmakers to follow suit, after all. It does what it says on the tin, nothing more, nothing less —and this is what will matter when you hop into it every day for the next 72 months. 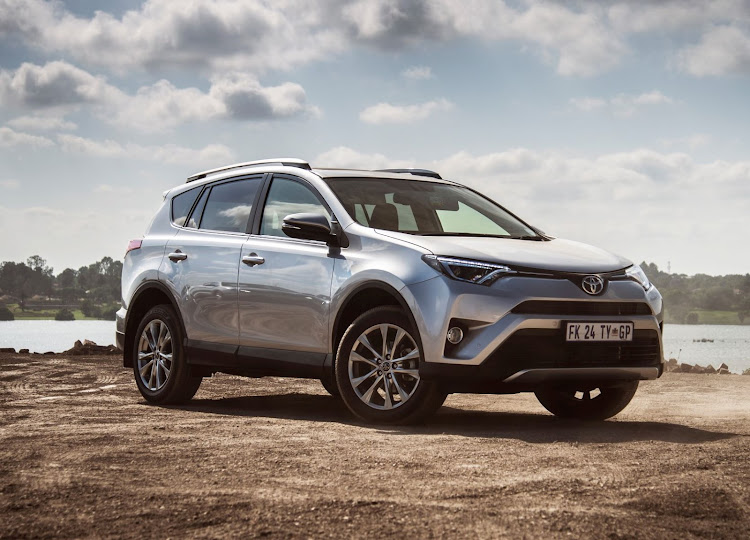 An easy choice but not an inspiring one either

When it comes to appliance-like dependability (and insipidity), the Toyota RAV4 is rather skilled at offering quirk-free companionship. Now in its fourth generation, the model is a far cry from the dinky toy that was the first iteration.

A minor revision towards the end of 2015 saw the RAV4 receive an assortment of styling tweaks in a bid to foster a jazzier persona. But frankly speaking, nobody is going to opt into RAV4 ownership for aesthetic reasons. 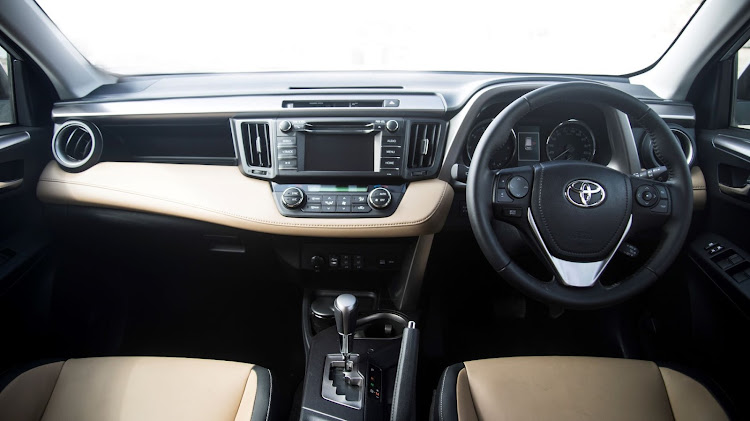 The interior of the Toyota Rav4.
Image: Henrie Snyman

Like the Nissan Qashqai, this is a tool to be purchased with the mind and not the heart. What other averment can be made, other than to say that it a sensible option. Dimensionally, the Toyota appears a little more generous when stacked against the competition. The luggage compartment is especially commodious.

Considering the vast network of Toyota dealerships and the irreproachable reputation of the brand, this would be an easy choice to make. But not a particularly inspiring one. 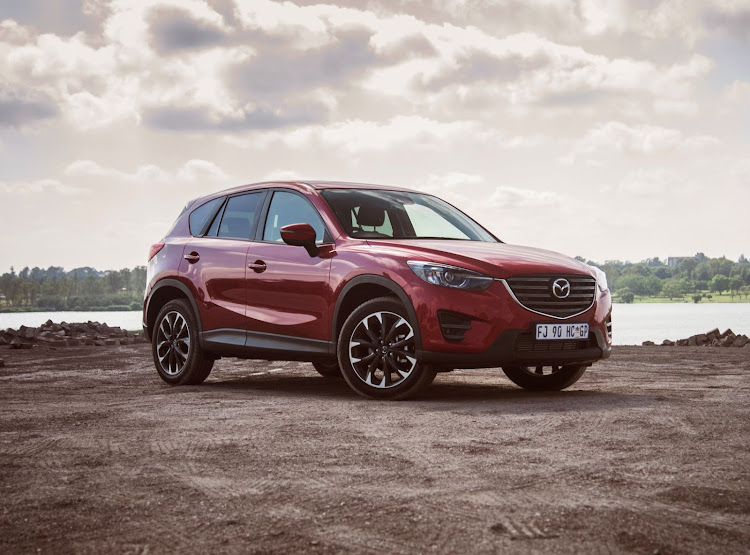 The resurgence of Mazda has been encouraging to observe. However, the CX-5 begins to reveal its age when examined alongside the newer contemporaries in this set. After all, it was first launched four years ago —a considerable time in the automotive industry.

Mostly, the CX-5 takes flack for lagging behind competitors in the areas of engine and transmission choices. Although it is not without redemption. Interior quality is difficult to fault. And we maintain that it provides an altogether accomplished experience from behind the wheel. 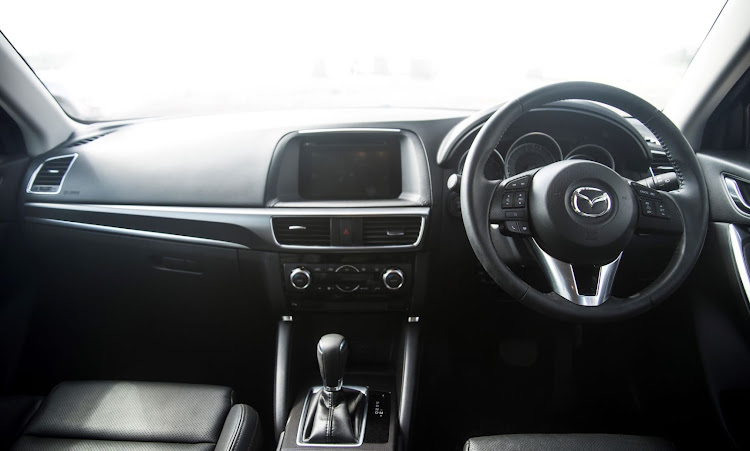 The interior of the Mazda CX-5.
Image: Henrie Snyman

Then there is the enchanting design, with a symphony of interesting shapes and traits that seize attention. The trade-off to these dynamic proportions is a slightly lesser degree of rear space, particularly in terms of headroom for rear passengers.

But few can dispute that this is the most soulful contender present —aesthetically, at least. 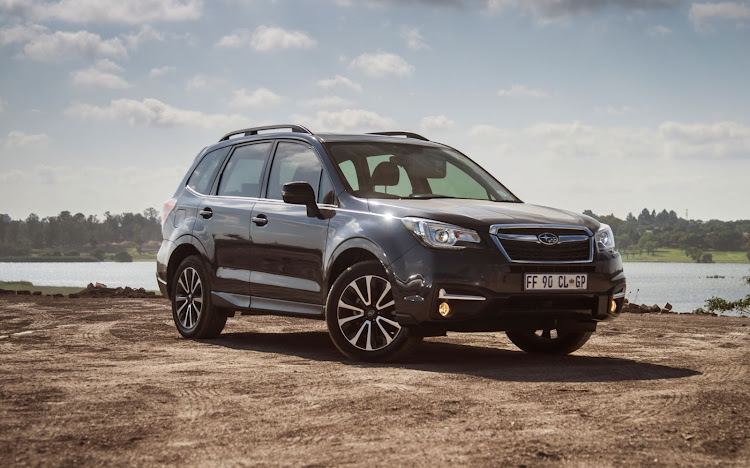 Subaru Forester a bit of an anachronism

Arguably the most left-field choice here, the Subaru Forester is regarded as a venerable, upstanding member of the automotive community. One understands the irritatingly smug air held by owners of the model.

Its repute as an ultra-reliable and sturdy hauler has been forged over the past two decades. Considering its ample ground clearance and that all-wheel drive is standard on all models, it is a viable choice for those with outdoorsy ambitions. 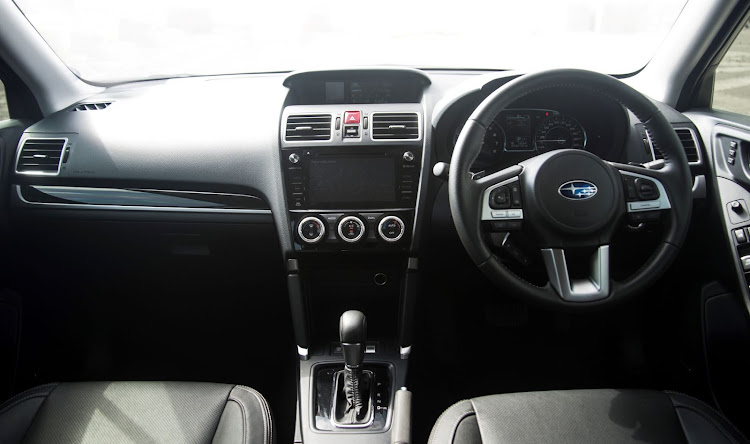 The interior of the Subaru Forester.
Image: Henrie Snyman

Staffers commented that they would be happiest in this, when conditions underfoot grew tough. But the Forester will never win any prizes for trendiness, and in this company, it seems like a bit of an anachronism.

Still, die-hard Subaru apologists will not be mired by this. And if true substance and robustness is your priority, you are not likely be fazed by the decidedly anti-contemporary character of the Forester.

Pivotally, it should be noted that there is a level of parity on this field of players. None is beset by harsh inadequacies that would dissuade consumers. But some are more equal than others.

If you seek a no-frills appliance, then the Toyota RAV4 and Nissan Qashqai would be your immediate choices.

The Renault Kadjar conceals its Japanese-derived roots with Gallic charm, as clichéd as that descriptor might sound.

Subaru and the unpretentious Forester caters to a certain buyer who shuns the mainstream.

While the Mazda CX-5, age and uninspiring powertrains notwithstanding, is the most exciting to look at and still projects an aura of sound quality.

Being the latest to join the fray, the new Kia Sportage is bound to garner a considerable amount of interest. And this is not without reason, either.

However, the superior competence of the Volkswagen Tiguan is tough to ignore. It brings with it a level of sophistication that puts it closer to the realm of prestige marques. This vehicle offers a tangible demonstration of the difference between good products and great ones.

This week the time machine takes us to December 13 2015, when we sought to provide an overview of what the B-segment crossover field had to offer.
Motoring
1 year ago

Join us as we take a gander back at some of our automotive endeavours from days gone by. This week, the time machine takes us to February 21 2016, ...
Motoring
1 year ago