While 2020 might be a write-off in most aspects, aficionados of the hot hatchback genre had more than a few silver linings to appreciate.

For us at the coalface of product evaluation, the year started with the BMW M135i (F40). Then in February, Hyundai (finally) launched its i30 N locally in the Western Cape.

Just before lockdown, we had a short stint at the helm of the Mercedes-AMG A35.

Even as the wheels of the country halted under strict Covid-19 prevention measures, the virtual launches continued for a home-based and captive audience.

Volkswagen announced the pricing and arrival of its GTI TCR, commemorating the end of production for the seventh generation Golf. Only 300 were allocated to our market. The preceding description of “only” seems amusing when you consider the stock of Mégane RS 300 Trophy examples for our country. Seven units. Only seven.

Last week, the stars aligned and, rather fortuitously, our test schedule saw the convergence of the German from Wolfsburg plus its French and earlier-mentioned South Korean peers. A three-way assessment was in order. We tried for track time, but our efforts were unsuccessful. The back waters of Gauteng would have to do. 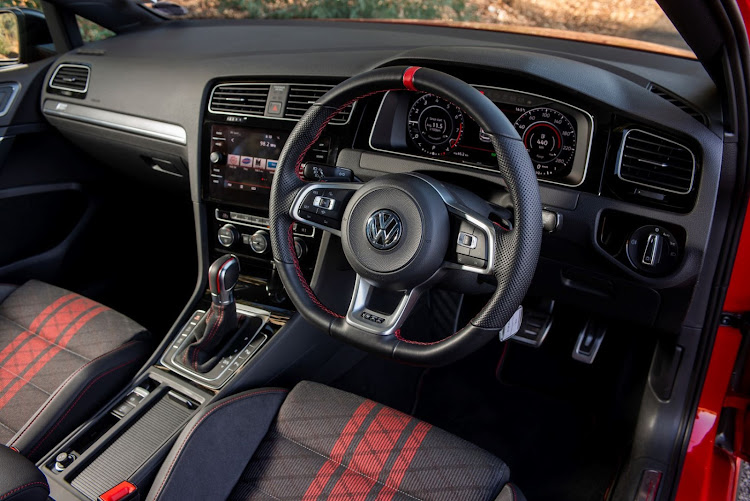 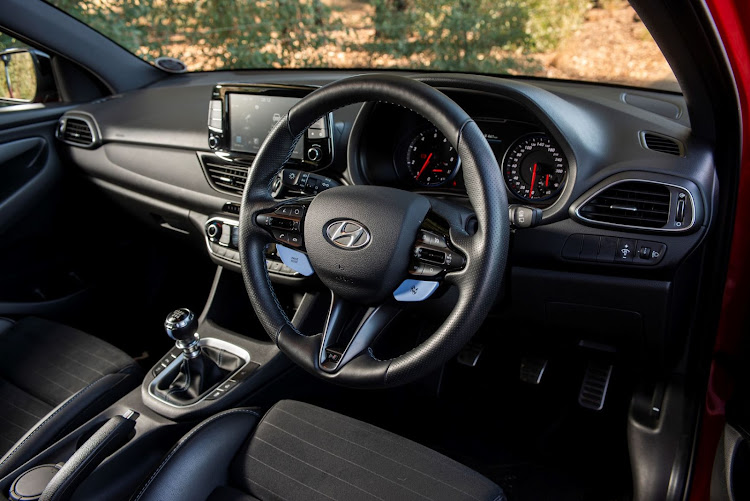 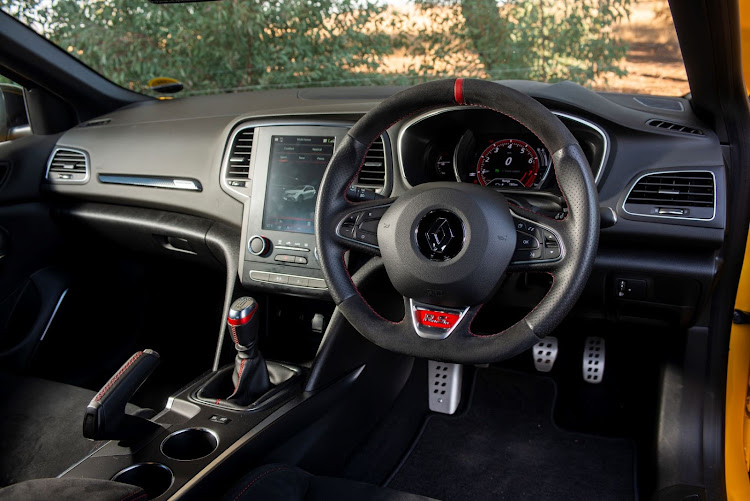 This little bust-up would be incomplete without a brief weigh in on the aesthetic prowess of each contender. As a collective, they espouse the requirements of the segment rather proudly: all pumped-up, snarling and raring to shoo obstinate fellow road users out of the right lane.

Even though these products are distinguishable in their own respects, there are styling similarities that unite them. Take, for example, how they all got their feet dipped in dark paint. A like-for-like approach is seen in the aerodynamic accoutrements adorning our fighters, from their lips to their roof spoilers. Same goes for those thematic red brake callipers. Although, the Volkswagen and Renault are clearly more partial to body art, with similar, dotted motifs. No tattoos for the Hyundai. 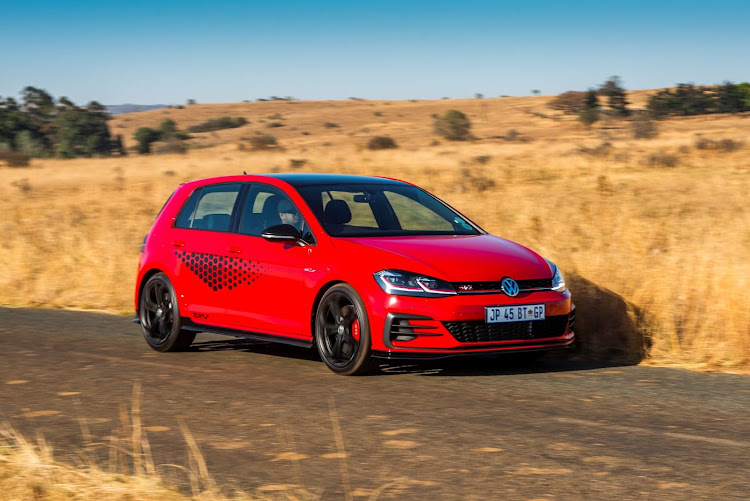 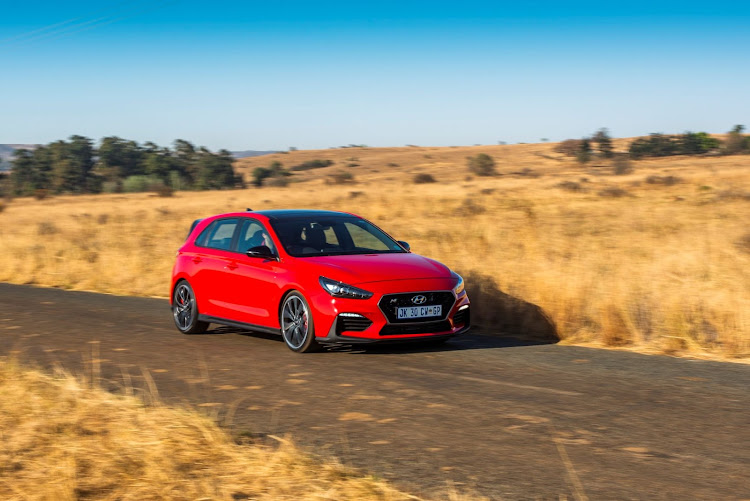 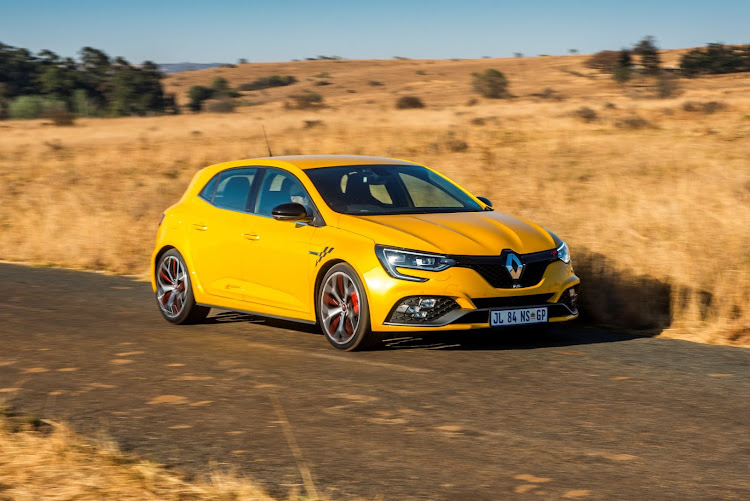 We should remind ourselves that when all is said and done, these are garden variety C-segment vehicles with the most practical of sensibilities. Strip away the performance credentials and assertive exteriors and you have chariots that appeal to the every man or woman consumer wanting a no-frills, medium-sized hatchback with reasonable levels of comfort and refinement.

Getting into the Golf was a reminder of the depth to which its engineers prioritised quality when it was conceived nearly a decade ago. This is an old car, preceding both these latest generations of the Mégane and i30 N (the regular i30 version is not sold in SA).

Yet, for something launched in 2013, it still feels wonderfully contemporary, with a substance and tactile integrity that shames the other two machines here. Pity about the fabric seat inserts, though, which just feel cheap.

The Hyundai is betrayed by coarse plastics and a drab ambience overall. Unlike the other two cars, where the colour of passion (red, again) is splashed about, the i30 N is entirely black and grey.

Meanwhile, the Renault is bullish about its commitment to spirited motoring. The Recaro pews are the huggiest and most aggressively-bolstered of the lot. It is the only one to feature a fuzzy Alcantara sectioned steering wheel. 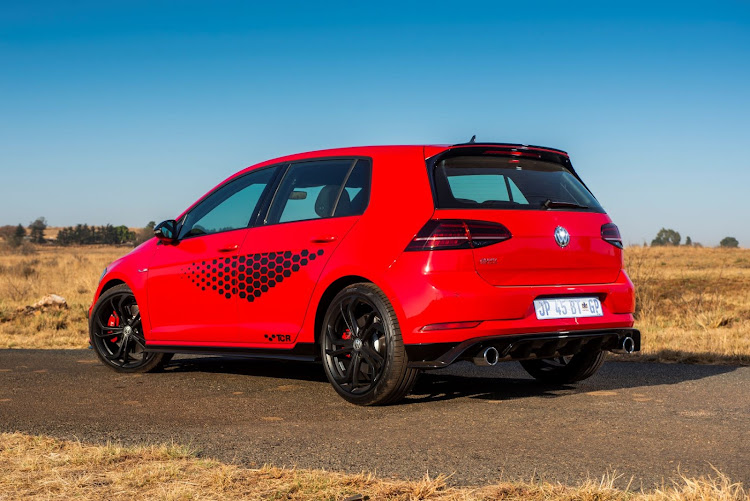 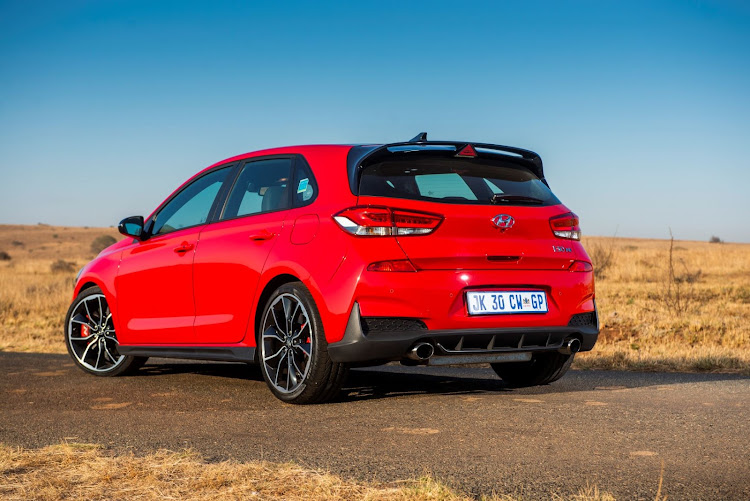 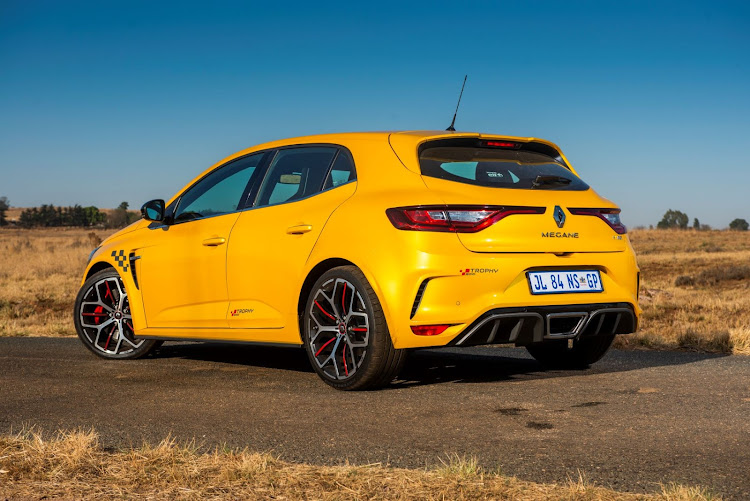 As you already know, there is commonality in the means of motivation employed by the trio. All are turbocharged, with power sent to the front wheels and with 2.0-litre displacements – or close – in the case of the French car, with its 1.8-litre unit.

Need a refresh on the power output and purported pace? The Hyundai i30 N has 202kW, 353Nm and a claimed sprint time of 6.1 seconds. Next up, the Renault Mégane RS 300 Trophy. We have 221kW and 420Nm. Its makers say it will run from standstill to three digits in 5.7 seconds.

Lastly, we have the Volkswagen Golf GTI TCR. The second-most powerful here, with 213kW and 380Nm. Despite that power deficit, it is quickest on paper, with a promised sprint figure of 5.6 seconds.

Earlier this year, group motoring editor Denis Droppa staged a battle between the French and South Korean rivals at Gerotek. According to the VBOX data, the Renault dispatched the dash in 5.9 seconds, while the Hyundai mustered a pedestrian 7.1 seconds.

We were probably not going to eke out much better on our empty stretch of Muldersdrift road, so we opted to quote these existing, credible figures and just give the Golf a run instead. Photographer Waldo Swiegers strapped his Garmin GLO telemetry device onto the Volkswagen and we went for a dash. It registered 6.2 seconds. 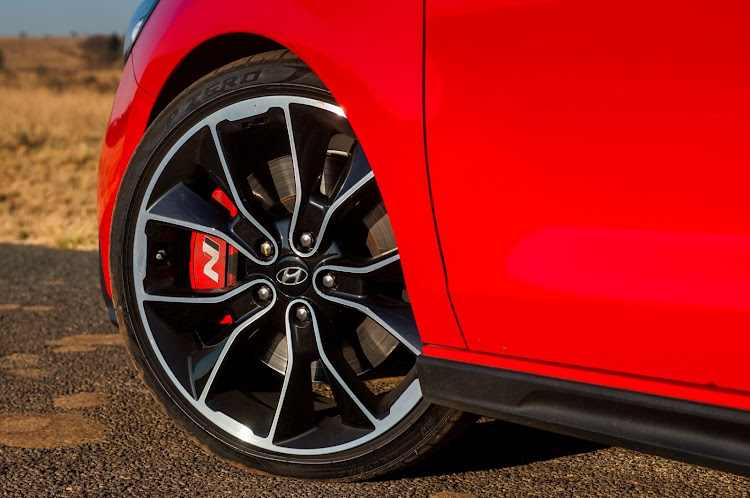 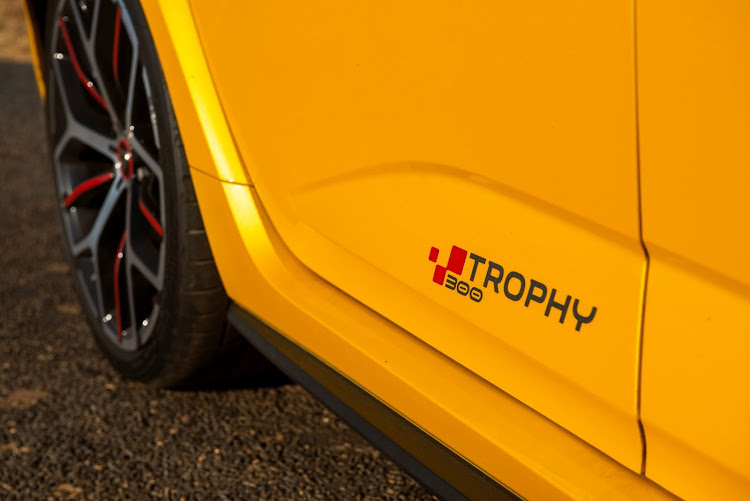 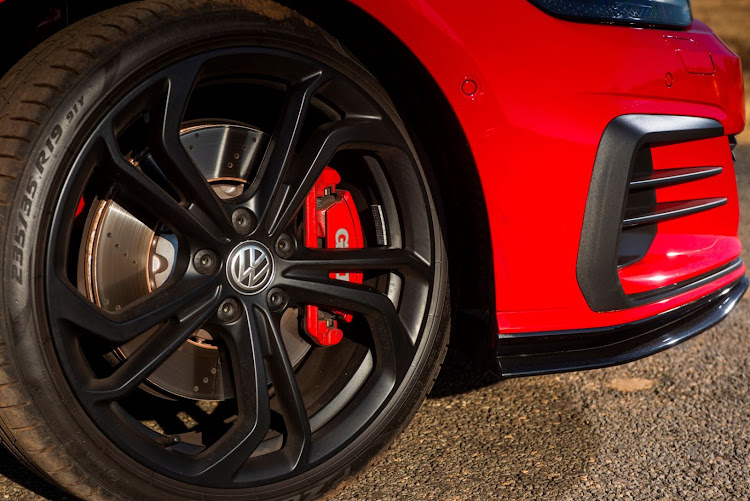 Hyundai went the distance to imbue its first genuine contribution to the hot hatchback arena with proper credentials, from Namyang to the Nürburgring. Then there is the inextricable link with Albert Biermann, former BMW M boss, who worked his magic on the project.

The result is better than you might imagine – seriously. Go and drive one if you can. It strikes such a superb balance between dynamism and daily usability. The difference between each of its driving modes is stark: you can go from shake-your-fillings-out firmness to tolerable suppleness at the touch of a button.

There was one issue noted with our car, sadly, which was a brake pedal with a disconcerting amount of travel before delivering suitable anchorage.

Still, there was some redemption brought by the acoustics. Everyone loves the sound of Rice Krispies through the exhaust, and the Hyundai delivers giggle-inducing crackles and snaps.

On the other hand, the Mégane is buzzier in vocal signature and lacks the duality of its Asian peer when it comes to settling down.

Even though it has a mechanical limited slip differential to aid proceedings, you can tell the front axle grapples with its directional and power application duties.

The 10 best fast Volkswagen Golf models of all time

From G60 and R to GTI and VR6, we take a look back at some of the Golf's finest moments
Motoring
1 year ago

This is a raw, scruff-of-the-neck type of animal, in a manner that is quite true to the ethos of its predecessors. It is the only product with four-wheel steering here, which brings a characteristic that does take some getting used to. Much like the prospect of living with one, entirely. Unforgivingly hard-edged, this Renault is best suited to the kind of driver who can commit to performance motoring and accept the everyday compromises.

Then we have the GTI, a long-standing archetype, often described as a Jack of all trades. But in this exclusive, special edition TCR guise, things are turned up a few notches – it is named after the international racing series, after all.

Its timbre sounds not unlike the bass-infused battle cry of its more powerful  four-wheel drive R sibling. And each upshift is punctuated with a violent-sounding rip.

But given the TCR title and the status of the model as a swansong for a generation, your expectations might have been bigger. The TCR does not strike one as radically wilder than, say, the Clubsport from a few years back. Actually, the manual, three-door Clubsport S seemed like a more convincing way to close the chapter.

Anyway, that aside, you could praise it in the same way you would a regular Golf GTI. It makes all the right noises and certainly makes the job of looking heroic behind the wheel rather easy. Piloting the TCR hard and with vigour takes little doing, which is great, unless you fancy yourself as the kind of driver who relishes a certain layer of involvement. In which case, you are probably better off looking at the other two cars here.

With its exclusive status and limited production run, the GTI TCR is bound to be very popular, and for many buyers will represent a sound investment at R669,900. If they can beat the inevitable inflationary pricing, of course, since most of them are already snapped up.

Starting at R774,900, the Renault does seem like a tough sell in comparison, but with fewer than 10 here, the rarity factor is undeniable.

The one that will require that salespeople work a bit harder is the Hyundai i30 N. Unlike the other cars, with their proven, respected acronyms, the letter “N” is yet to be accepted into the lexicon of SA hot hatchback enthusiasts. But that means you can pick one up for considerably less than the R679,000 launch price.

These are the top 10 most searched for used hatchbacks under R250,000

The Volkswagen Polo is the country’s most searched for hatch while Volkswagen is dominating this important segment of the motor industry. And South ...
Motoring
4 months ago

Six sun-kissed convertibles to blow your hair back this summer

September is the month in which South Africans celebrate our heritage. When it comes to cars, there's a lot we can look back at rather fondly
Motoring
4 months ago
Next Article