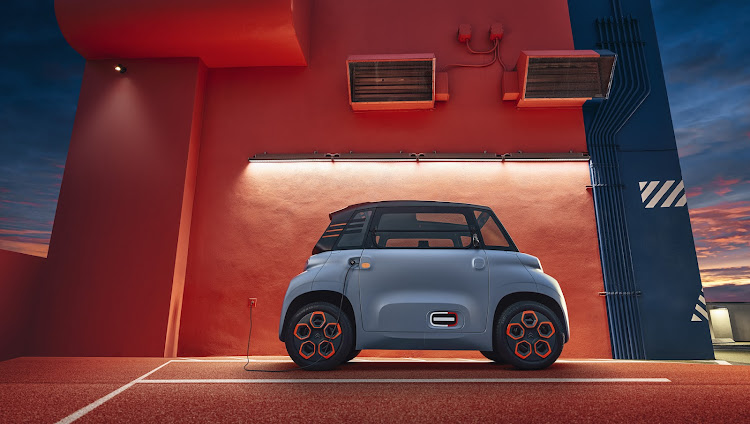 The all-electric Citroën Ami carries some of the spirit of the 2CV.
Image: Supplied

The Citroën 2CV is to France what the VW Beetle is to Germany: a cheerful budget banger that was designed to mobilise the masses after years of bloody conflict. I got to drive one once and it was, let me tell you, quite an experience.

This particular example was owned by an eccentric cellarmaster, who after finding out during an impromptu wine tasting that I had a penchant for classic cars insisted that I “immediately” take his beloved Red ‘66 for a drive up the Franschhoek Pass.

Totally unperturbed by the amount of vino that may or may not have been imbibed, the proprietor of this machine threw me in behind the steering wheel and over the roar of its tiny boxer engine described how working the column-mounted gear lever was “like having that sense of knowing exactly when you can touch a woman’s breast — timing is everything”.

As a 25-year-old with limited carnal knowledge this advice was a bit lost on me to be honest and consequently we grated our way up one of SA’s most treacherous mountain roads with squealing tyres and near-useless brakes.

Lord knows how we returned to the vineyards below without careening over a cliff or smashing into the back of a truck but we did: a feat toasted with another bottle of bubbles and more analogies that I’m a bit loath to print in 2021. Folks, it was a different time. 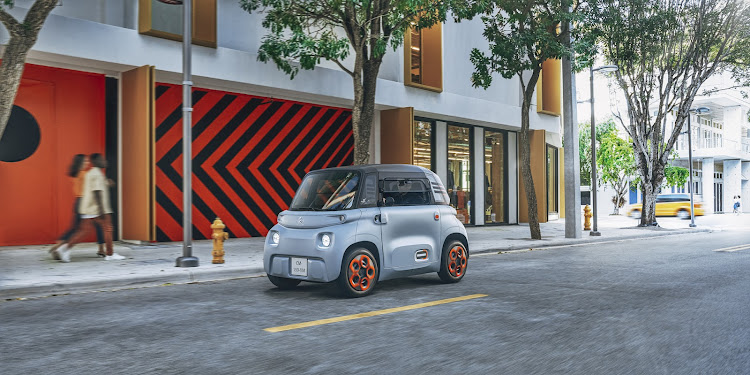 Now I’m not sure if this little red “deux chevaux” is still around but if it is I’m sure it would be pleased to hear that its pioneering spirit is busy being rekindled in the new Citroën Ami: a pint-sized city car that plans to democratise the electric vehicle (EV) experience.

You see up until now electric cars have — especially in backwaters such as SA — been seen as expensive follies best enjoyed by the wealthy or well-subsidised. And, to be honest, this isn’t entirely unfair considering that the technology present in joule-gobbling machines like the Jaguar I-Pace, Volvo XC40 Recharge and Mini Cooper SE doesn’t come cheap.

Batteries are the main culprit here as the mining, refining and processing of the minerals used to produce them is a costly exercise. Then you need to factor in size: a larger battery pack will drive up the range but also the car’s sticker price. So to get around this, Citroën made the AMI’s battery as small as possible. Whereas an I-Pace rocks a 90kWh battery the one in the Ami weighs in at just 5.5kWh.

This cost-cutting has been carried through to the car’s construction, which is basically a simple steel frame clad with a few funky plastic panels. The design of the front is the same as the rear and the door on the right is the same as one on the left — they just open differently. Quirky, yes, but it also reduces the amount of tooling needed to build the Ami and thus it costs a lot less.

Poke your head inside the compact cabin and you will — like I did with its ancestor, the 2CV — notice that luxuries have been kept to an absolute minimum. There’s a heated rear windscreen but no air-conditioning. Instead you manually crack one of the flap-open windows and let nature do its thing. The two seats have been hewn out of plastic with each sporting a pad for your bottom and back. 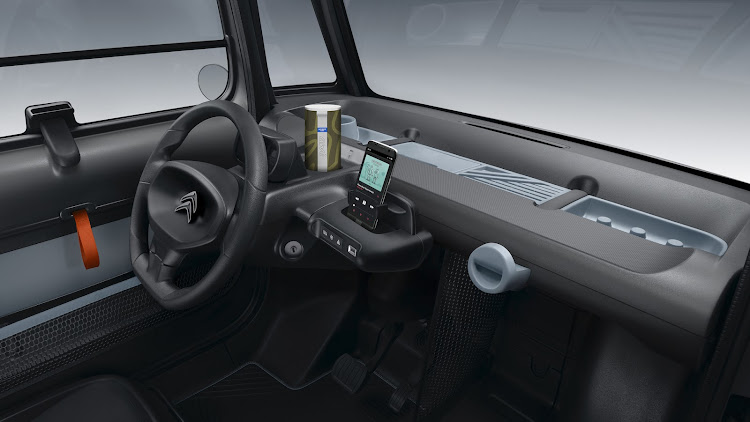 Infotainment comes in the form of a USB dock for your smartphone and a shelf behind the steering wheel in which you can stash a Bluetooth speaker. Meanwhile, the digital cluster tells you exactly two things — how much range is remaining and how fast you are going.

The former peaks at 75km while the latter is limited to just 45km/h. On paper this sounds ridiculous but if you live inside a congested city such as Johannesburg do you really need anything more — especially when you consider that most of us are now allowed to work from home. Look, perhaps I’m in the minority here but for my current needs in the “New Normal” — going to buy groceries, driving to the park or visiting the nearest Gautrain station — this little Citroën would more than suffice.

It’s easy to charge too. For unlike bigger, more expensive EVs the Ami doesn’t need a fancy three-phase outlet to replenish its cells in a hurry. Plug it into a domestic wall socket and it’ll be ready to roll again in three hours. That’s quicker than my phone.

The downside here, obviously, is that the Ami is never going to take you to the coast for your December holiday. This and the fact that at the time of writing Citroën has no plans on bringing the Ami to SA any time soon — a shame because I believe that this is exactly the kind of car we need to showcase this exciting new dawn of electric vehicles.

It’s a simple short-range solution to our sketchy public transport, cheap to run and priced at €6,000 (roughly R106,000 excluding import duties) affordable to buy. In short the Citroën Ami has the potential to be the 2CV of a new digital generation. I approve and I think that cellarmaster, wherever he is these days, might too.

I had been experimenting with my homemade pasta sauce in the week this bright yellow 2021 Toyota Agya rolled into my driveway.
Motoring
2 weeks ago

It took awhile but the sixth-generation PSA-engineered Opel Corsa is finally on sale in SA. Thomas Falkiner took one for a test drive so he could ...
Motoring
3 weeks ago

If you were a kid growing up in the 1980s there's a pretty good chance that you misspent your afternoons playing with radio-controlled cars. If so ...
Motoring
2 weeks ago
Next Article