Silverstone to host British Grand Prix until at least 2024 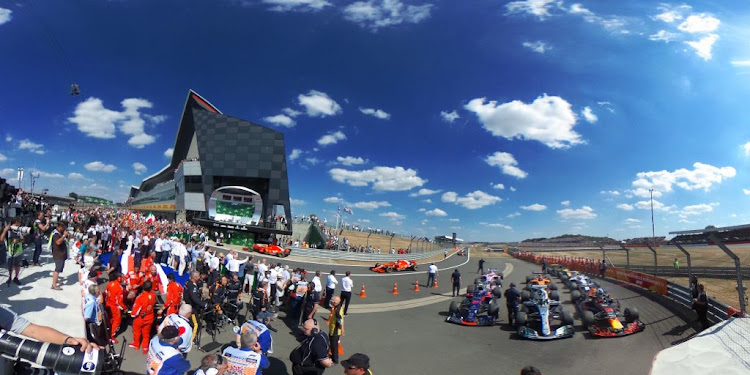 Formula One champion Lewis Hamilton's home British Grand Prix will stay at Silverstone for at least the next five years under a new deal announced on Wednesday.

The race's future had been in doubt since 2017, when a break clause was activated to terminate the contract after this weekend's grand prix.

Circuit owners the British Racing Drivers' Club (BRDC) had argued that the previous contract negotiated with former supremo Bernie Ecclestone was no longer financially viable due to escalating fees.

Formula One said in a statement the new deal ensured the circuit, which hosted the first world championship grand prix in 1950, would remain on the calendar until at least the end of 2024.

"We have always said that, if it is to have a long-term future, our sport must preserve its historic venues and Silverstone and Great Britain represent the cradle of this sport," said Formula One chair Chase Carey.

"Formula One is a global sport, held on five continents, watched by an audience of over 500 million fans around the world and our aim is to grow this number by bringing the sport we love to new countries, while also maintaining its roots," he added.

"Silverstone and the British Grand Prix are an integral part of that vision."

No financial details were immediately available.

Britain and Italy are the only two countries that have always featured on the Formula One calendar since the debut championship.

A new contract will be a big boost to British motor racing, with seven of the 10 F1 teams based in the country and the motorsport industry providing tens of thousands of jobs.

Mercedes' five times world champion Hamilton has won five times at Silverstone and last year's race at the former World War Two airfield was the best attended of any grand prix with a 140,500 crowd on race day.

"This deal has met all of the tests that we set ourselves at the beginning of this exercise," Silverstone managing director Stuart Pringle told Reuters when asked how the new contract differed from the old one.

He added that it was now financially viable.

"It will be different, this deal, because it places an emphasis on both parties working in a far more collaborative fashion to try and develop the British Grand Prix to our mutual benefit," he added.

Pringle stressed, however, that it would be misleading to suggest there was any sharing of the risk with Formula One management. "We're still absolutely on the hook," he said.

Pringle said last month that contract negotiations had been complicated by Formula One's desire to also hold a street race in London, but he sounded more relaxed on Wednesday.

"We have had our concerns satisfactorily addressed in this agreement," he said.

The deal switches the focus to Spain, Germany and Mexico – all races without contracts for 2020 and at risk of dropping off the calendar.

Italy has also yet to confirm a new deal, although there is an agreement in principle, but the race at Monza is expected to continue given the history surrounding it.

A street race in Vietnam and a Dutch Grand Prix at Zandvoort are due to debut next year on what is set to remain a 21-race championship.

Endangered British Grand Prix at Silverstone looks set to stay on the Formula One calendar with hopes rising that a new deal will be announced before ...
Motoring
2 years ago

Brad Binder is moving up to MotoGP in 2020

After 81 years, it's the end of the road for the Volkswagen Beetle