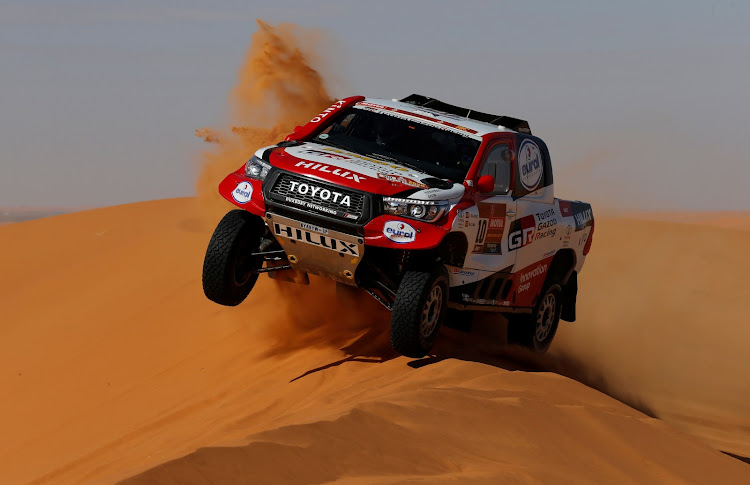 The motorcycle riders had their stage cancelled as a mark of respect after the death on Sunday of popular Portuguese veteran Paulo Goncalves.

The absence of motorcycle tracks, with the riders usually preceding the cars, made navigation more tricky through the dunes.

SRT Racing's Serradori, a former biker who dedicated his stage win to Goncalves, took advantage of the tracks laid by others to become the first amateur in 32 years to beat the professional drivers and teams.

Alonso, in his first Dakar with former motorcycle winner Marc Coma alongside, could also claim the drive of the day with a time quicker than all the favourites, with their years of desert driving experience.

“I didn't know if in the Dakar I would be half an hour behind the biggest specialists, and being close to them on days like this, even ahead of them, was not in any of my sensible goals,” said the Toyota driver.

The Spaniard, also a two-time Le Mans 24 Hours winner, moved up to 13th overall after finishing four minutes behind Serradori and said it had been an amazing day. His previous best in a stage was fourth.

“We had one puncture unfortunately and we lost a little bit of momentum there, but otherwise the stage was nearly perfect and Marc was unbelievable, you know, in the dunes, the navigation,” he said.

“It seems that I can get a good rhythm, a good flow in the dunes and I'm enjoying so far this second week of the Dakar,” added Alonso, who lost two and a half hours with a broken wheel and suspension on day two.

The stage also brought a return to form for SA's Giniel de Villiers, who went fourth fastest on the day in his four-wheel drive Hilux, 6 min 29 sec off the leading pace, despite the fast tracks clearly suiting the two-wheel-drive cars again.

“The changes the team had made to the aerodynamics of our cars certainly helped,” said De Villiers after the stage. “The buggies are still faster, but the changes allowed us to stay in touch.”

Toyota's Nasser al-Attiyah was 11th on the day, but made up nearly four minutes on the lead.

In the truck category, Russian Andrey Karginov took his third successive stage victory and had a 27-minute lead over Kamaz teammate Anton Shibalov.

The rally, one of the toughest events on the motorsport calendar, ends in Qiddiya on January 17.

SA's Giniel de Villiers is seventh overall in Saudi Arabia after finishing sixth on Wednesday in his Toyota Hilux.
Motoring
1 year ago

Former F1 champion plunges down the order with suspension damage, while Mini's Orlando Terranova takes the lead in Saudi Arabia.
Motoring
1 year ago