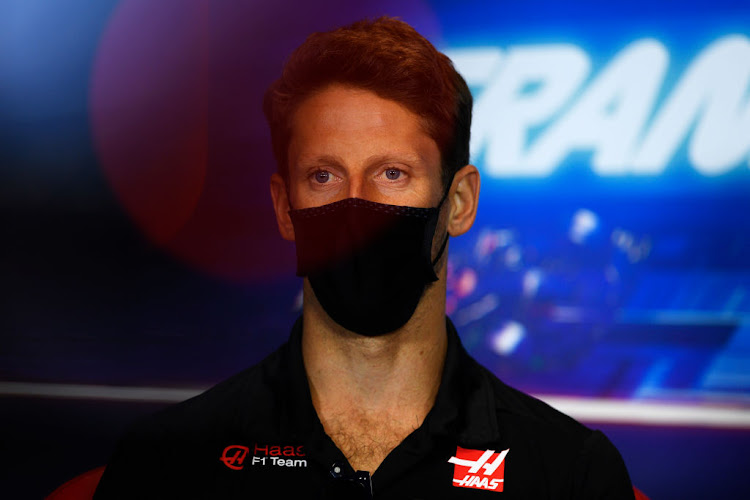 Romain Grosjean of France and Haas F1 talks in the drivers press conference during previews before the F1 Grand Prix of Portugal at Autodromo Internacional do Algarve on October 22 2020 in Portimao.
Image: Rudy Carezzevoli/Getty Images

The US-owned Haas Formula One team announced on Thursday they will have an all-new driver line-up next year, with departing Frenchman Romain Grosjean blaming the decision on financial reasons.

Grosjean, 34, has been at the Ferrari-powered team since 2016, with 28-year-old Danish driver Kevin Magnussen joining in 2017.

Both now face uncertain futures, recognising that their chances of finding a seat elsewhere in Formula One were slim.

Team boss Guenther Steiner told reporters in a video conference at the Portuguese Grand Prix that the decision was taken two or three weeks ago and he informed the drivers last week.

Grosjean, who posted a message on social media declaring “the last chapter is closed and the book is finished”, said the call came as no surprise.

“I knew probably one of us would be out at the end of the year, just because the situation around the world and Covid has made it very hard financially for a lot of companies,” he told reporters.

“That's why I said to Guenther ... when he called me, that I was expecting one of us, and he said, 'No, for financial reasons, I need both of you out'. So fair enough, I fully understand.”

Steiner said he was in no hurry to name their replacements and did not want to talk about any names that might be on the shortlist for a team currently ninth overall.

He has plenty of options, several likely to bring sponsorship or commercial backing.

Steiner said talent was key but “some people have got sponsorship they bring with them so we are looking at all the options out there as well”.

Russian Formula Two driver Nikita Mazepin is the son of a billionaire who tried to buy the Force India team, now Racing Point, in 2018 before the eventual sale of assets to Canadian Lawrence Stroll.

Mexican Sergio Perez, who is leaving Racing Point at the end of the year, also has strong sponsorship.

Ferrari are meanwhile looking to place some of their young drivers, with Michael Schumacher's 21-year-old son Mick leading the Formula Two championship and a strong candidate for Haas or Alfa Romeo.

Britain's Callum Ilott, second in the F2 standings, had been due to take part in Friday practice with Haas at the Nürburgring two weeks ago but that was prevented by bad weather.

Steiner said he could have delayed Thursday's announcement but had wanted to do the right thing for the current drivers.

“If we tell them only whenever we decide who is going to drive the car, it could be the end of the year, and they would have a lesser chance to find something for next year,” he explained.

Romain Grosjean and Kevin Magnussen will leave the Haas Formula One team at the end of the season, the US-owned outfit said on Thursday ahead of the ...
Motoring
6 months ago

Racing Point expect Lance Stroll to race in this weekend's Portuguese Formula One Grand Prix after the Canadian was cleared of Covid-19 but have Nico ...
Motoring
6 months ago

Formula One champions and former Mercedes team mates Nico Rosberg and Lewis Hamilton are set to lock horns again as owners of rival outfits in the ...
Motoring
6 months ago
Next Article