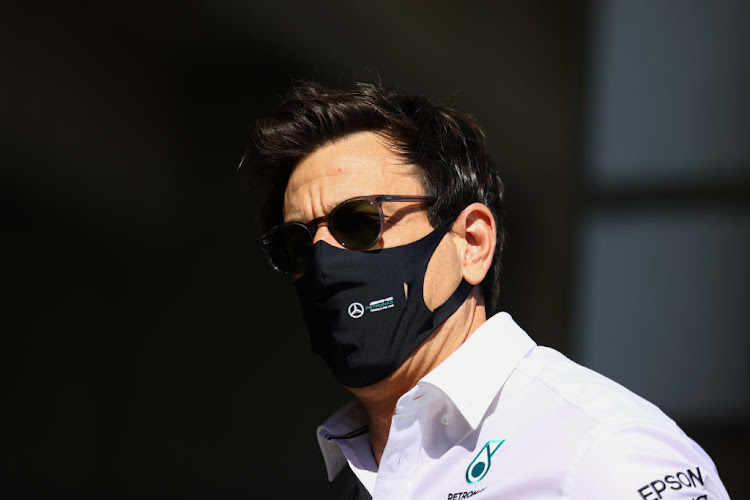 Mercedes GP Executive Director Toto Wolff walks in the Paddock before practice ahead of the F1 Grand Prix of Hungary at Hungaroring on July 30, 2021 in Budapest, Hungary.
Image: Bryn Lennon/Getty Images

Mercedes team boss Toto Wolff said Red Bull's criticism of seven-time champion Lewis Hamilton in the aftermath of his collision with Formula One title rival Max Verstappen at the British Grand Prix were below the belt and had crossed a line.

The pair collided on the opening lap of the race around the high-speed Silverstone track, with the contact putting Red Bull's Verstappen out of the race in a 51G crash that sent the Dutchman to hospital for precautionary checks.

Hamilton was handed a 10-second time penalty by stewards but the Briton still went on to win his home race for a record-extending eighth time and slash his deficit to Verstappen to eight points from 33 in the overall standings.

The Milton Keynes-based team, feeling Hamilton had got off easy, had asked stewards to review the incident but their petition was dismissed on Thursday ahead of the Hungarian Grand Prix for lack of new evidence.

Mercedes responded with a punchy statement, saying they hoped it would end Red Bull's attempt to “tarnish the good name and sporting integrity of Lewis Hamilton”.

“We wanted to bring a little bit of respect back to the discussion,” Wolff told reporters on Friday in a video conference from the Hungaroring track.

“We understand that emotions can run high. But we felt that line was overstepped.”

Red Bull team boss Christian Horner had criticised Hamilton's move as “desperate” after the Silverstone race, while the team's motorsport adviser Helmut Marko had called for the Briton to be handed a one-race ban. Verstappen described Hamilton and the Mercedes team's post-race celebrations as “disrespectful”.

Wolff said Red Bull had elaborated on those criticisms in the submissions they made to stewards as part of their petition for a review.

“We felt the comments that were made during and after the race, and then in written statements and in the meeting itself were below the belt,” he said.

“But it’s not up to me, nor would Lewis want to demand any apologies,” he added.

“If that had been any other driver the reaction would have been identical,” he added, calling Mercedes' statement “antagonistic”.

“As far as we’re concerned the chapter is now closed.”