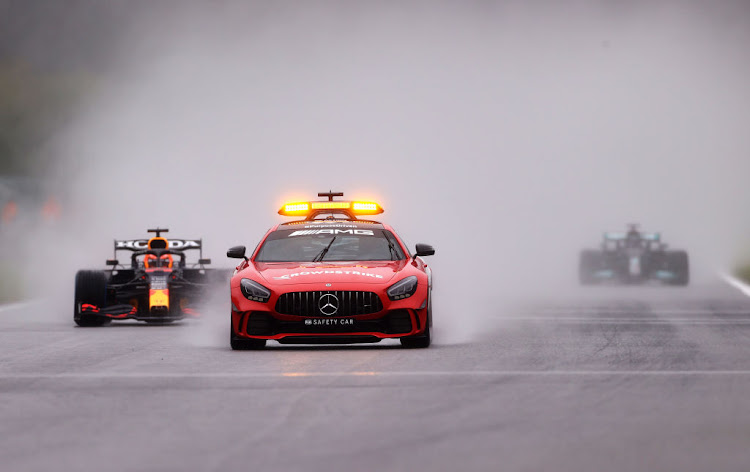 The FIA safety car leads Max Verstappen and the rest of the field at the restart during the F1 Grand Prix of Belgium at Circuit de Spa-Francorchamps on August 29 2021 in Spa.
Image: Lars Baron/Getty Images

Sunday’s rainswept Belgian Grand Prix will go down in history as Formula One’s shortest ever race, and also as a leading contender for most farcical.

Calling it a race takes a mighty stretch of the imagination — a delay of more than three hours with crowds enduring cold and rain to see a few processional laps behind the safety car in heavy spray and no overtaking.

Officially, the action lasted all of three minutes and 27 seconds with Red Bull’s Max Verstappen the winner, a result effectively decided in Saturday’s qualifying.

Half points were then handed out for only the sixth time ever.

“If you want to get a reward for qualifying you should get points for qualifying,” said Aston Martin’s four-times world champion Sebastian Vettel.

“If there were actually no race laps, no competition, why should points be given and any result be given  because there was basically no race<” asked Ferrari’s Carlos Sainz, who finished 10th.

The rules say at least two laps are necessary for a race to become official and half points be awarded, but Sunday’s solution came across as a cynical box-ticking exercise to some and plain wrong to others.

The champagne was sprayed but, apart from George Russell appearing on the podium for the first time for Williams with second place, there was little to celebrate.

Seven-times world champion Lewis Hamilton, who finished third, said the fans had been robbed and should get their money back.

He later took to Instagram to call it a “farce”.

“We should have just called it quits,” he added.

McLaren boss Zak Brown called for the rules to be overhauled to prevent such a situation happening again.

“The regulations state that after you do a few laps it can be called a race. I think that needs to be reviewed. We need a better solution as a sport when that type of situation happens,” said Brown.

“The outcome should not be a race after three laps behind a safety car. I don’t think anyone would say today it felt right calling that a race.”

Comparisons were drawn to the 2005 US Grand Prix at Indianapolis, when only six cars started after Michelin-shod cars withdrew for safety reasons and went on to score full points.

That at least went the distance, and overtaking was possible — at least in theory although Ferrari’s Michael Schumacher was never threatened by team mate Rubens Barrichello and they were in a different league to the Minardis and Jordans.

On Sunday there never seemed any question of racing, given there was poor visibility due to the weather conditions and no sign of improvement.

“They knew when they sent us out at the end there that the track wasn’t any better and they did it just so we could start two laps behind the safety car,” said Hamilton.

“There was no point at which we could race so there wasn’t a race.”

He said also postponement to Monday had not been an option, with the Dutch Grand Prix following next weekend, and insisted there had been hope the race might start.

“There was really the will to do the race,” said the Italian.

“But the problem is the weather started to be even worse. So it’s not really commercial on that, I can guarantee.”

The start of the Belgian Formula One Grand Prix was suspended after torrential rain drenched the Spa-Francorchamps circuit on Sunday and two hours ...
Motoring
3 weeks ago

Perez crashes out of Belgian GP before the start

Red Bull suffered another blow to their Formula One constructors' championship challenge when Mexican Sergio Perez crashed out of the Belgian Grand ...
Motoring
3 weeks ago