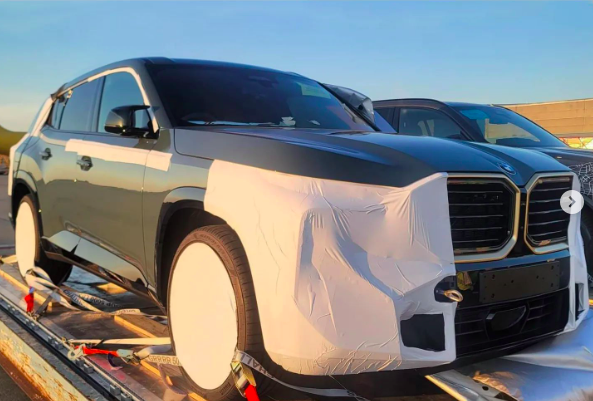 Photographs of what appear to be a production BMW XM have been posted to Instagram by user Wilcoblok.
Image: Instagram / @Wilcoblol

New cars “leaking” on social media before their official debuts is an all too common occurrence in this digital day and age — and an absolute nightmare for manufacturers.

The latest victim is BMW, who has just had photographs of its soon-to-be-revealed XM splashed all over Instagram by user Wilcoblok. Developed by the Munich carmaker's M Division, this flagship SUV is (as TimesLIVE Motoring reported earlier this week) a plug-in hybrid model that marries a newly developed 4.4l twin-turbocharged V8 petrol engine to an electric drive system for a claimed total output of 480kW and 800Nm of torque.

This is distributed to all paws via a hybrid-specific M xDrive four-wheel drive system. BMW hasn't released performance figures, but expect it to be ludicrously fast. Raw pace aside, it also offers a claimed maximum pure-electric driving range of about 80km.

In terms of exterior styling, the XM is unashamedly aggressive with a huge kidney grille finished in gold, enormous front air intakes and a new split headlamp design similar to the one BMW used on the 7 Series. There's more contrasting gold trim running along the vehicle's belt line — and glasshouse for that matter — and at the rear a pair of double-stacked exhaust tailpipes set either side of the large gloss-black rear air diffuser.

The single photograph of the interior reveals a suede headliner and a leather-wrapped sports steering wheel fitted with two M driving mode buttons (M1 and M2).

BMW was set to unveil the XM later this year with series production starting in December.

Shelby SA is applying the finishing touches to a unique Shelby Speedster that's soon to be delivered to its owner in the Western Cape. One of three ...
Motoring
1 month ago

Porsche has revealed its new 718 Cayman GT4 ePerformance: a rolling test bed for an all-electric race car the Stuttgart-based marque is hoping to ...
Motoring
1 month ago

BMW has updated its G20-generation 3 Series with a host of styling and technology tweaks.
Motoring
1 month ago