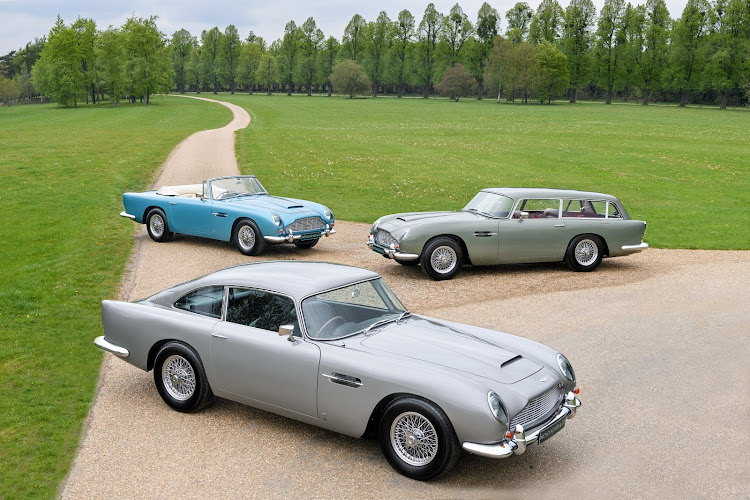 A classic DB5 for every occasion: Coupe, Convertible and Shooting Brake. Picture: SUPPLIED

Having one classic Aston Martin DB5 in a collection is special; having three is something of a holy grail in automotive lore — akin to having a few Van Goghs hanging in your mansion.

Heightened by its association with a certain fictitious British secret agent, the DB5 is perhaps the most iconic British car of all. Just more than 1,000 examples of James Bond’s favoured car of the 1960s were built and only 70 were performance-enhanced Vantage versions. UK-based Aston Martin specialist dealer Nicholas Mee & Co is offering a trio of DB5 Vantages to a classic-car enthusiast who can stump up the £4m (R76m) asking price.

Forever associated with 007, the DB5 first appeared in the 1960s with actor Sean Connery at the wheel, but also made a reappearance in the latest from the movie franchise, No Time To Die.

The luxury grand tourer launched in 1963 had a 4.0l engine with 210kW of power, but Vantage versions launched a year later were boosted to 242kW, which made them sought-after sports cars.

All three body types of the DB5 Vantage are represented in the sale, including the rare Shooting Brake estate version of which only 12 units were built. The first one was custom-made for former Aston Martin chair David Brown, who was an avid hunter and dog owner. This more practical version was later requested by 11 other customers.

The DB5 Vantage Convertible was an icon of the swinging sixties, whose owners included fashion designer Ralph Lauren and actor Peter Sellers. Only 123 were built and the car offered here is one of just five in Vantage specification.

The third car in this trio, and the most well-known body type, is the DB5 Vantage Coupe made famous in the 1964 James Bond film Goldfinger. Unlike the movie car, the version on sale has no machine guns, rotating number plates or other gadgets, but it does have a Silver Birch paint job with a black hide interior — the same colour combination as Bond’s version.

Collected over a 12-year period, each one of the three cars has been restored by leading Aston Martin restoration specialists, allowing them to be enjoyed in as-new condition, according to Nicholas Mee & Co.

“In the 40 or more years I have been dealing in Aston Martin cars, I have never been more excited than to offer this fabulous collection of iconic DB5 Vantages. Each one [is] extremely rare, they are all in a beautifully restored condition and we are delighted to bring to market this once-in-a-lifetime opportunity for a collector to invest in this unique DB5 Vantage collection,” says company founder Nicholas Mee.

“The DB5 is the most iconic Aston Martin model ever produced during Aston Martin’s 108-year history of building cars. This collection of DB5 Vantages, covering every body style manufactured, I feel sure, will forever be recognised as the ultimate Vantage collection.”

Even the cleanest cars on the road aren’t immune from accusations of greenwashing. Hyundai Motor Co’s UK unit has been ordered to refrain from saying ...
Motoring
1 week ago