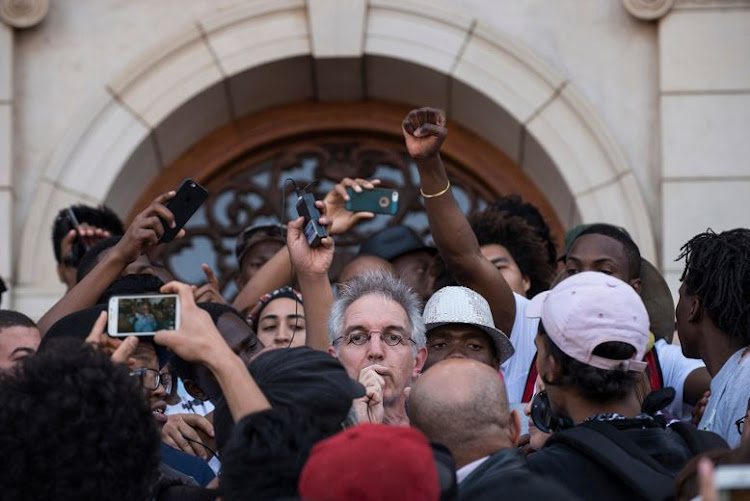 Halfway through Wednesday’s mass meeting at the University of Cape Town‚ which was led by protest movement Fees Must Fall‚ word spread that the university management had gone to court to stop a planned protest on Thursday.

There was a hush when news of the interdict was announced to protesters‚ who were singing protest songs‚ with SRC president Seipati Tshabalala concluding the meeting shortly afterwards.

UCT received a strike notice on Monday afternoon from the South African Liberated Public Sector Workers’ Union‚ accusing the university of exploiting its insourced workers. The Labour Court in Cape Town ruled on Wednesday that a specific time and setting for the protest had not been outlined in the strike notice‚ therefore allowing UCT to obtain the interdict which derailed the planned shutdown.

Salipswu representative Abrahams Agulhus said the union has now withdrawn the strike notice in order to prepare a new one. “UCT have been delaying the issue‚” he said‚ adding that technicalities will not stop the union from pursuing strike action if demands are not met.

University of Cape Town (UCT) vice-chancellor Max Price says a planned shutdown of the university could cost the institution as much as R500-million.
News
4 years ago

“The minimum requirements for workers at UCT are not being met. Do not give up‚” said Agulhus.

Prior to the announcement‚ Fees Must Fall activist Athabile Nonxuba called for students to show solidarity with workers and the union. He said while “there is nothing nice about striking”‚ they would take every measure to ensure progress on the issue.

“We will shut down the university until the end of the semester if needs be‚” he said following earlier pleas from UCT Vice-Chancellor Max Price to avoid disruptions at all costs.

Agulhus elaborated on the demands of the union‚ saying that UCT workers were being overworked and uncompensated for overtime‚ despite the “considerable resources” available to UCT to rectify this.

A workers representative had led wild applause from the crowd after accusing the UCT hierarchy of using monies that should be allocated toward reforming employment structures for bonuses awarded to the UCT management. He claimed that more than R2.5-million had been used. Tshabalala alleged that the UCT management “arrogantly” walked out of the meeting that took place with Salipswu on Tuesday afternoon.

UCT shutdown 'will be disastrous'

The University of Cape Town (UCT) said disruptions of its academic programme would “disastrous for the university’s financial stability” and ...
News
4 years ago

“Look at Max Price’s bonus‚” she said. “What about me? They are willing to pay for private security to stop us from striking‚ but what about me?”

It was confirmed on Wednesday that private security company Vetus Schola had been assigned to assist security during any possible strikes‚ a move that angered Fees Must Fall.

“[UCT] have hired this security to intimidate us. We will not be deterred by private security‚” said Tshabalala.

UCT spokesperson Elijah Moholola said in a media statement that the UCT executive was “pleased that there has now been an agreement on a process to further engagement”‚ also suggesting that the union will not engage in strike action without a “genuine attempt to resolve outstanding issues with management”. Aghulus said that the union would return with a new strike notice should the negotiations stall again.