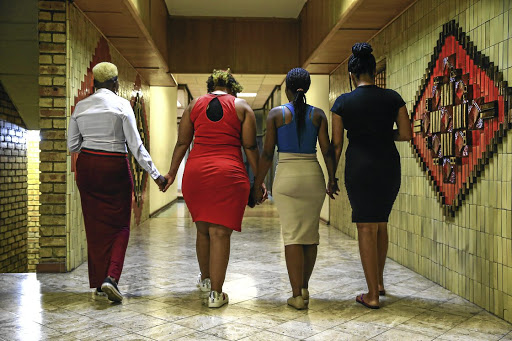 Four women who cannot be identified have opened cases against their bishop at Jehovah Shammah International Ministries in Klerksdorp.
Image: Simphiwe Nkwali

He invited them to his shack to hear “prophecies” but they were  raped or sexually assaulted.

This is the claim of 10 women at Bishop TJ Pitso’s corrugated-iron church in Klerksdorp.

The church is  the focus of a police investigation after the pastor’s former personal assistant revealed his alleged behaviour.

Pitso portrays himself as “the prophet who cares”, but the former PA said she helped him rig his prophecies by gathering personal information on congregants and planting animal skins and insects on them.

The woman told the Sunday Times this week that she had decided to tell all  after the death of her grandmother, who had a heart attack after being labelled a witch as a result of a rigged Pitso prophecy.

One woman said the Jehovah Shammah International Ministries pastor told her to have an abortion when she became pregnant after he raped her.  She refused.

“I left the church and became a laughing stock. Everyone knew I didn’t have a boyfriend. My child is 15 now,” she said.

Ten women told  the Sunday Times about their alleged ordeals with the pastor.

North West police spokeswoman Colonel Adele Myburgh said three cases of rape and one of sexual assault had been opened against Pitso.

Myburgh said the pastor  was questioned last Sunday. “The police are gathering evidence. Last week we only had two rape cases. Another rape and sexual assault case were opened against the same person this week.