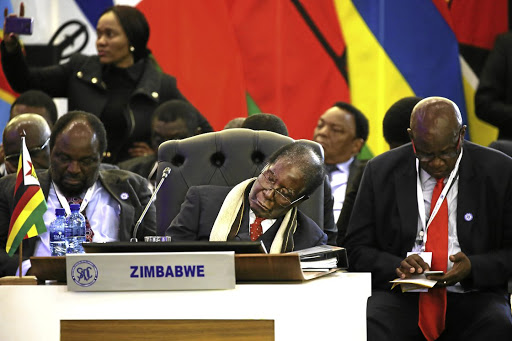 Zimbabweans waited with anxiety as President Robert Mugabe reshuffled his cabinet on Monday night‚ to see the new balance of power between factions angling to succeed him as the country heads for elections.

Last month‚ the president selected a task force that included his wife Grace to steer the party's election campaign. Now‚ the new cabinet is expected to hold fort as Mugabe seeks re-election‚ working with the task force.

The biggest causality was minister of finance Patrick Chinamasa‚ who was moved to a new portfolio as Minister of Cyber Security‚ Threat Detection and Mitigation. Social media went into overdrive in jest as the minister who was in charge of the economy in its current dip was demoted to "national WhatsApp group administrator".

Zodwa Wabantu is looking to strengthen her African network by meeting Zimbabwean President Robert Mugabe, a meeting she said she is in the process of ...
TshisaLIVE
4 years ago

In the past Chinamasa has held powerful cabinet posts such as Justice‚ Legal and Parliamentary Affairs.

Vice-President Emmerson Mnangagwa‚ who doubled as minister of legal affairs‚ lost that portfolio and only remains as one of two vice-presidents. Analysts say this move is meant to weaken his position in the race to succeed Mugabe.

"He is at the mercy of the president‚ who can choose to remove him as vice-president if he so wishes. His counterpart Phelekezela Mphoko is still doubling as minister of National Healing and Reconciliation‚" said political commentator Josphat Ngulube.

Some ministers were moved around or accommodated in new postings. Former minister of Media and Broadcasting Services Chris Mushowe was given a department in charge of scholarships in the president's office. Opposition party Movement for Democratic Change (MDC-T)'s spokesman Obert Gutu quipped that the reshuffle was a high-sounding nothing. "Actually he should have reshuffled himself by immediately announcing his retirement‚" he said.

Some analysts argue that rival political parties should be worried about their strategies as the election season nears but that instead they are glued on Zanu-PF internal politics.

"Zanu-PF might be weak‚ but divided and fighting among ourselves‚ we are even weaker. At least we owe it to our people‚ let us unite and give them hope and a fighting chance next year‚" activist Whitlaw Mugwiji wrote in an op-ed in independent daily News Day.

Meanwhile‚ the Zimbabwe Electoral Commission (ZEC) has intensified voter registration with a target of registering at least 7-million voters for the country's first biometric (BVR) polls.

According to the ZEC‚ so far there are 75 registered political parties in Zimbabwe expected to take part at the 2018 general and presidential elections.

It is up to the parties to urge their supporters to register so as to avoid voter apathy. "We expect that political parties will complement these efforts‚ by education their members of the BVR exercise‚" chairperson Justice Rita Makarau said.