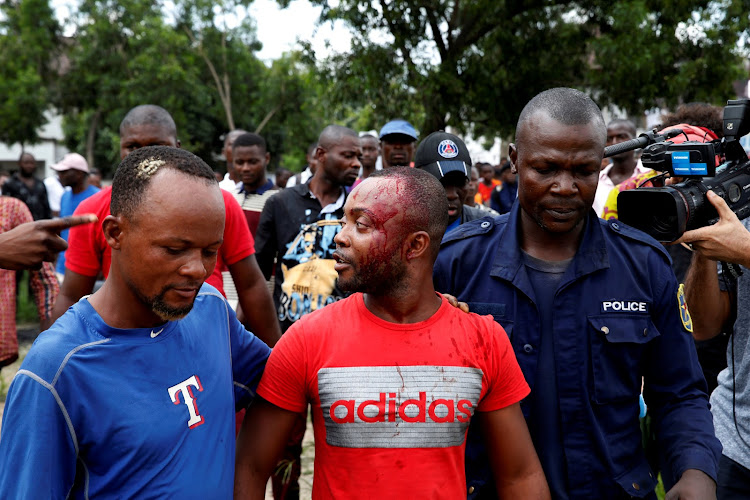 A man who was injured before an election rally of Felix Tshisekedi, leader of Congolese main opposition party the Union for Democracy and Social Progress (UDPS), is escorted by police officers in Kinshasa, Democratic Republic of Congo, December 21 2018.
Image: REUTERS/Baz Ratner

At least 890 people are believed to have been killed in ethnic violence in northwestern Democratic Republic of Congo last month, the United Nations human rights office said on Wednesday.

The toll doubles an estimate provided on Monday by a local priest and a civil society activist who said that at least 400 people had been killed in bloodshed which led the government to cancel voting there in last month’s presidential election.

“According to allegations from credible sources, at least 890 people were killed between 16 and 18 December in four villages in Yumbi territory, Mai-Ndombe province in the west of the Democratic Republic of the Congo, in what appear to have been clashes between the Banunu and Batende communities,” the UN human rights office said in a statement.

Communal fighting and widespread pillaging around the town of Yumbi, a normally peaceful area, led to an estimated 16,000 people seeking refuge by crossing the Congo River into the Republic of Congo, it added.

It was not clear if the violence was directly related to the election, the results of which are disputed. But it pointed to the kind of unrest that can quickly be unleashed.

The UN human rights office said 465 houses and buildings, including schools, a health centre, market and office of the national electoral commission, had been burned or pillaged.

“It is crucial that this shocking violence be promptly, thoroughly investigated and the perpetrators be brought to justice,” said UN High Commissioner for Human Rights Michelle Bachelet.

Seeing the people of the Democratic Republic of Congo, his home country, cast their votes in December 2018 was a “blessing” to Michel Matamba, who ...
News
3 years ago

Opposition candidate Felix Tshisekedi has come out on top in the DRC's much anticipated elections, with the surprise results sparking mixed reactions ...
News
3 years ago