'The damage is around US$500,000. We hope to rise up from this terrible setback and continue to service our patients,' said the hospital’s CEO 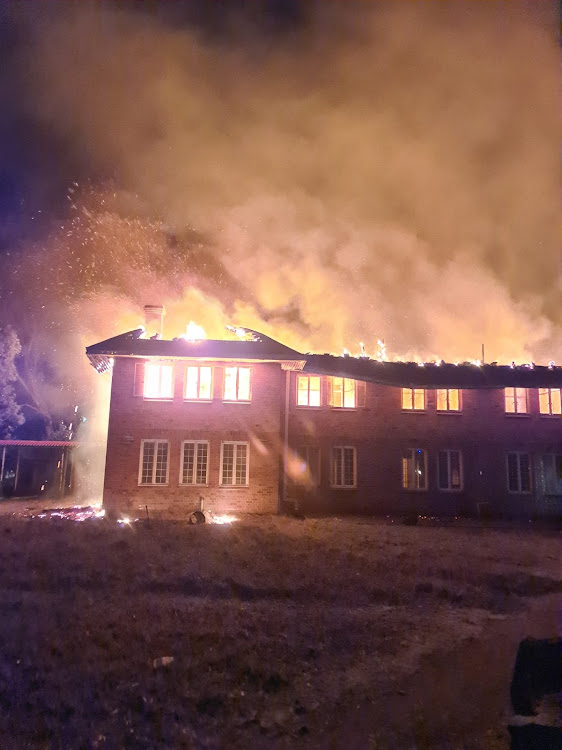 The staff quarters at Mpilo Central Hospital in Zimbabwe caught alight on Wednesday, with US$500,000 worth of property being destroyed.
Image: Twitter via @htchipunza

A raging fire has gutted the staff quarters at one of Zimbabwe’s main hospitals, destroying US$500,000 worth of property.

“We were very lucky that no-one was seriously injured. One person suffered a broken ankle and another had smoke inhalation effects but is stable. Our thoughts are with the affected members and their families.

“Some staff residents reported seeing sparks from an electrical distribution box, and we suspect that this could be the cause of the fire. However, the fire brigade is working on further forensic investigations to establish the exact cause of the fire. The estimated cost of damage to property is around US$500,000.

“We hope to rise up from this terrible setback and continue to service our patients,” said Ngwenya.

Mpilo Central Hospital is a 1,000-bed hospital and one of the only two public hospitals in the country which offer chemotherapy and radiotherapy treatment.

Doctors at the hospital took to social media with the hashtag #Mpilofire, describing how some of them escaped the raging fire by leaping out of windows.

@MMudumiso tweeted: “Lost everything I owned in the fire. Escaped through the window. But what matters is the gift of life. I am grateful #MpiloFire.”

@Solwayo1 tweeted: “Terrible things at our hospital. Thixo why us, why?? Mpilo Central Hospital our only pride!! Why!! Gutted!!”

@drruwende tweeted: “At least we all alive, but a few items bought by poor doctors perished. Never rains.”

A chief in Zimbabwe has ordered the exhumation and reburial of Robert Mugabe's remains at the national heroes' shrine in Harare after accusing the ...
News
1 year ago

EFF MP Mbuyiseni Ndlozi was among those who defended the former Zimbabwean president and first lady.
News
1 year ago

Former SA deputy minister of arts and culture Rejoice Mabudafhasi will in a fortnight present her credentials in Harare as she takes up residence ...
News
1 year ago