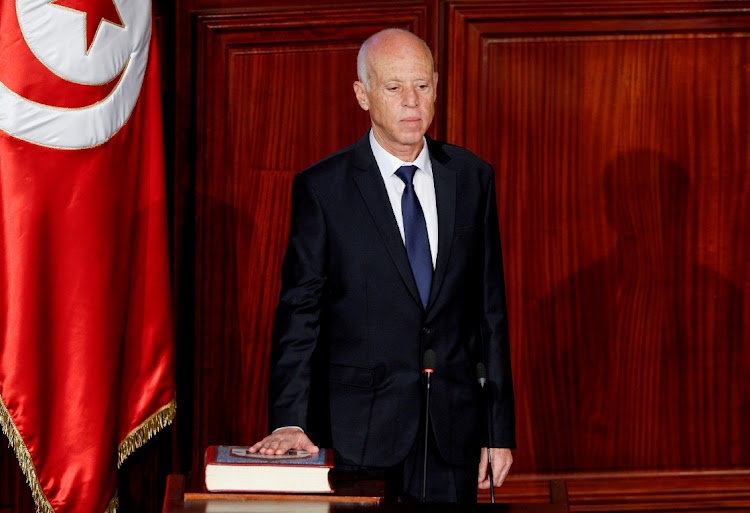 Tunisia's President Kais Saied on Saturday indicated he was preparing to change the country's constitution, but said he would only do so using existing constitutional means, seven weeks after he seized powers in moves his foes called a coup.

The comments represented his clearest statement yet about what he intends to do next, having sworn there was "no going back" to the situation in the North African nation before his intervention on July 25.

Speaking live on television in a central Tunis boulevard, Saied said he respected the 2014 democratic constitution but that it was not eternal and could be amended.

"Amendments must be made within the framework of the constitution," he told the Sky News Arabia channel and Tunisian state television.

One of Saied's advisers told Reuters on Thursday the president was planning to suspend the constitution and offer an amended version via a referendum, prompting opposition from political parties and the powerful UGTT labour union.

Anxiety has been growing, both internally and among Western democracies that have supported Tunisia's public finances, over Saied's intentions since his July 25 announcement that he was sacking the prime minister and suspending parliament.

The former constitutional law professor justified those moves by citing emergency measures in the constitution that his critics and many legal scholars said did not support his intervention.

Though he indefinitely extended the measures after a month, he has yet to appoint a new government or make any clear declaration of his long-term intentions, as Tunisia struggles to confront a rolling economic crisis.

Saied also said on Saturday he was close to naming a new government. Ambassadors from the Group of Seven advanced economies this week urged him to quickly do so and return to "a constitutional order, in which an elected parliament plays a significant role."

Tunisian President Kais Saied plans to suspend the constitution and may amend the political system via a referendum, one of his advisers said on ...
News
2 weeks ago

Saied's intervention drew widespread support after years of political paralysis, but it has thrust Tunisia into crisis a decade after it threw off autocracy and embraced democracy in the revolution that triggered the Arab Spring.

Article 144 of the constitution says an amendment to the document can only be put to a referendum if it has already been approved by two-thirds of the parliament, an institution Saied last month called "a danger to the state".

The current parliament was elected in 2019, a week after Saied was elected. He does not have the power to dissolve it and call new elections, but some of the parties in the deeply fragmented chamber have indicated they could do so themselves.

The moderate Islamist Ennahda, the biggest party in parliament with a quarter of the seats, has accused Saied of carrying out a coup and on Saturday said deviating from the constitution would mean a retreat from democracy.

The UGTT, the main labor union in Tunisia, also on Saturday signalled it opposed the idea of suspending the constitution and called instead for new parliamentary elections - a route Saied may now be considering.

US presses Tunisia's president for swift return to democratic path

US national security adviser Jake Sullivan urged Tunisia's president on Saturday to outline a swift return to the "democratic path" following his ...
News
1 month ago

Tunisia was the Arab Spring’s first success. Will it be its last failure?

President has taken on near dictatorial powers, and it seems only military and largest labour union can save democracy
World
2 months ago