92% of affected products have already been retrieved, says Pioneer Foods 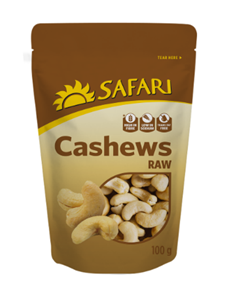 Pioneer Foods on Monday launched a recall of specific batches of Safari peanuts and raisins and cashew nuts in SA, Botswana and Namibia.

“Routine testing at the Safari production site in KwaZulu-Natal identified a batch of products which tested positive for low levels of salmonella typhimurium,” the company said.

“Based on safety protocols, production was immediately halted and the product was placed on hold and ring-fenced.”

The production site was deep-cleaned and vector sampling was completed.

However, on November 17, the company said a limited number of cases of Safari 60g peanuts and raisins (best before 27/10/2022) and Safari 100g raw cashews (best before 27/6/2022) were released to the trade, “despite having been isolated and ring-fenced for destruction”.

“This limited number of affected products should never have been released into trade, and while we have not received any health-related complaints from consumers to date, we have decided to proceed to proactively recall these specific products,” said CEO Tertius Carstens.

The company had managed to retrieve 92% of the affected products on Monday.

Only the Safari peanuts and raisins and raw cashew nuts products, with the relevant batch and production codes, distributed inside SA, Botswana and Namibia are affected:

Pioneer Foods said consumers who have these products, with the specific batch or date coding, are urged to return the products to the retailer from which they were purchased to receive a full refund.

All other Safari products remain safe for consumption.

The SA Human Rights Commission says claims on social media that  foreign nationals are responsible for the "contaminated noodles" that allegedly ...
News
1 month ago

A week after Appletiser announced a recall of six batches of its product due to elevated levels of a mould toxin, Pioneer Foods has announced a ...
News
3 months ago

Koo recall: None of the cans were supplied to other food manufacturers

The company which manufactured the millions of cans recalled this week by Tiger Brands - due to a minute risk of very low number of cans developing ...
News
5 months ago