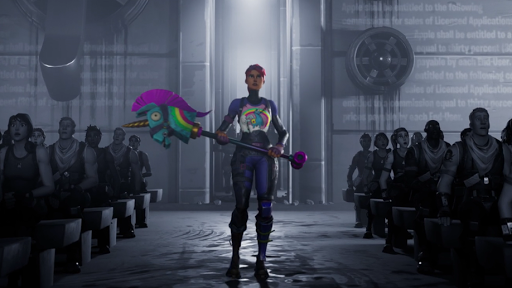 We don’t need to recap the whole situation again, do we? Epic Games updated Fortnite Mobile with a payment system that goes around the App Store and Play Store’s 30% cut of all payments, which made Apple very mad. Then it also made Google very angry so they removed the game and Epic slapped them both with a lawsuit.

Epic Games has been throwing the words “monopoly” and “anti-consumer” around for a few weeks, and while they’re not entirely wrong, those claims probably aren’t enough to win a court case against two of the biggest companies in the world. The latest development in the debacle has come to light, and Apple is sniffing for blood.

Apple has leveraged a countersuit against Epic Games, citing “commission theft and subterfuge” as their reasoning. The legal documents filed by Apple describe the alternate payment plan implemented in Fortnite Mobile as a “Trojan horse” that was designed to provoke a response and make Epic Games look like some kind of revolutionary hero. I extrapolated the end bit, but that’s basically what Apple’s getting at.

Epic Games intentionally kicked the hornet’s nest to promote a response that would give them an opportunity to lay legal charges is the angle Apple’s going for and, if we’re honest with ourselves, they’re not wrong.

While Epic has been trying to frame themselves as some kind of revolutionary figure waking up the masses, the odds of them winning the lawsuit with this countersuit look dim.

If Apple can prove Epic planned everything beforehand, well, I’m not a lawyer, but that doesn’t sound like a win for Tim Sweeney. Maybe if they didn’t release a damn trailer a few hours after everything kicked off they’d have more of a leg to stand on, but unfortunately they were obnoxious about everything and dug their own grave. Perhaps I’m speaking too early, but I can’t see how Epic spins this to its advantage.

Epic’s grand crusade to fight back against big bad Apple may be the biggest own goal of the decade.
News
1 year ago

Ubisoft isn’t happy about Ejoy.com’s free-to-play Area F2, which they allege is a blatant clone of, very-much-not-free-to-play, Rainbow Six Siege, so ...
News
1 year ago

PODCAST | Virtual is the new reality for motoring enthusiasts

In this episode of Cargumentative the guys host a special show dedicated to SIM racing - an online sport that's making headlines during the Covid-19 ...
Motoring
2 years ago