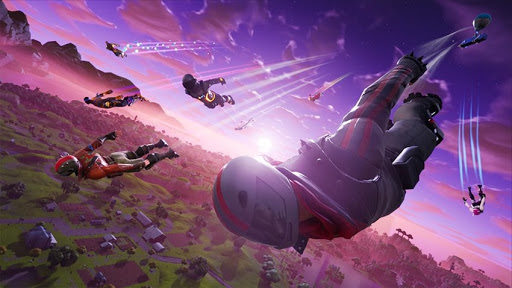 The lure of the Lira. The sterile smell of the Euro. The suntanned splendor of a US dollar. Whatever the currency, Apple and Google loves money. And that’s alright! If they want to fill their pockets with wonderfully chunky bits of copper and they can offer a service that earns your dosh, all the power to them. Epic Games also loves seeing bits of value arranged in tantalising bundles of profit, and they want more of it. A tale as old as time then, which has led to one of the biggest brouhahas in history as Epic has picked a fight with two of the biggest giants in business.

Here’s how it all got started. Not content with Apple’s notoriously strict App Store policies, Epic introduced a new payment system in Fortnite that would see zero cash go back to the house that Steve Jobs renovated. Legally, this was in direct violation of App Store policies, so Apple removed Fortnite from the store. Millions of gamers were cut off, and presumably they had to get their fix of winner winner chicken dinner from an alternate rush of digital dopamine such as PUBG Mobile. Poor bastards.

Here’s where things get pre-meditated interesting. Epic then revealed the Fortnite Party Royale short, a video in which uses subliminal messaging to turn Apple into a bad guy straight out of George Orwell’s 1984. Besides being holy crap that’s tone-deaf man, it’s a reference to Apple’s own attack on IBM from ages ago, that will most likely fly so hard over the heads of its target audience that it’ll achieve escape velocity and exit the atmosphere in record time.

Epic Games has defied the App Store Monopoly. In retaliation, Apple is blocking Fortnite from a billion devices. Visit fn.gg/freefortnite and join the fight to stop 2020 from becoming "1984"

But wait, there’s more! Epic then announced that it had filed legal action against Apple, accusing them of “anti-competitive restraints and monopolistic practices,” while also noting how developers on other Apple hardware aren’t beholden to the same App Store rules as  they benefit from competitive processing fees. Epic wants to tackle monopoly maintenance, denial of essential facility, and unreasonable restraints of trade according to their lawsuit, weaken Apple’s heavy-handed grip in the process.

Epic brings this suit to end Apple’s unfair and anti-competitive actions that Apple undertakes to unlawfully maintain its monopoly in two distinct, multi-billion dollar markets:(i) the iOS App Distribution Market, and (ii)the iOS In-App Payment Processing Market. Epic is not seeking monetary compensation from this Court for the injuries it has suffered. Nor is Epic seeking favorable treatment for itself, a single company.

Instead, Epic is seeking injunctive relief to allow fair competition in these two key markets that directly affect hundreds of millions of consumers and tens of thousands, if not more, of third-party app developers

Epic also stated how it picked this fight intentionally, knowing full well that introducing a new payment system would lead to Fortnite being de-listed:

Rather than tolerate this healthy competition and compete on the merits of its offering, Apple responded by removing Fortnite from sale on the App Store, which means that new users cannot download the app, and users who have already downloaded prior versions of the app from the App Store cannot update it to the latest version.

Not content with throwing its considerably-sized fists at just Apple, Epic has now also dropped a lawsuit elbow off the top rope on Google over alleged antitrust violations and the removal of Fortnite from their Paly Store. It’s a similar lawsuit, one wherein Epic’s bone to pick is over Google’s payment restrictions on the Play Store and the monopolistic violation that it creates in turn.

This is news that will have big ramifications for gaming overall, depending on which way the presumably lengthy court battle goes. The skeptic in you is naturally thinking that Epic’s only in this to make more money, and I don’t blame you: They probably are. They’re already weaponising their fanbase with a Free Fortnite hashtag and they’ve prepared a marketing campaign to cast Apple and Google as villains.

At the same time, what’s good for Epic is good for many studios across the board. Smaller companies and developers simply don’t have the muscle to pull off a ballsy move like this, and have had to play ball with Google and Apple using unfair rules for many a year. It’s going to be a divisive battle, with both sides having merit to their arguments for how they do business.

But right now, Epic’s winning hearts and minds to its cause, with a cunning PR scheme and an attack strategy that they’ve been planning for a long time.

Your origin story actually means something in Cyberpunk 2077

CD Projekt Red streamed Episode 2 of its Night City Wire series which included a look at the three “lifepaths” you can choose for protagonist V in ...
News
1 year ago