Emojipedia releases draft list of new emojis to be included in Emoji 15.0 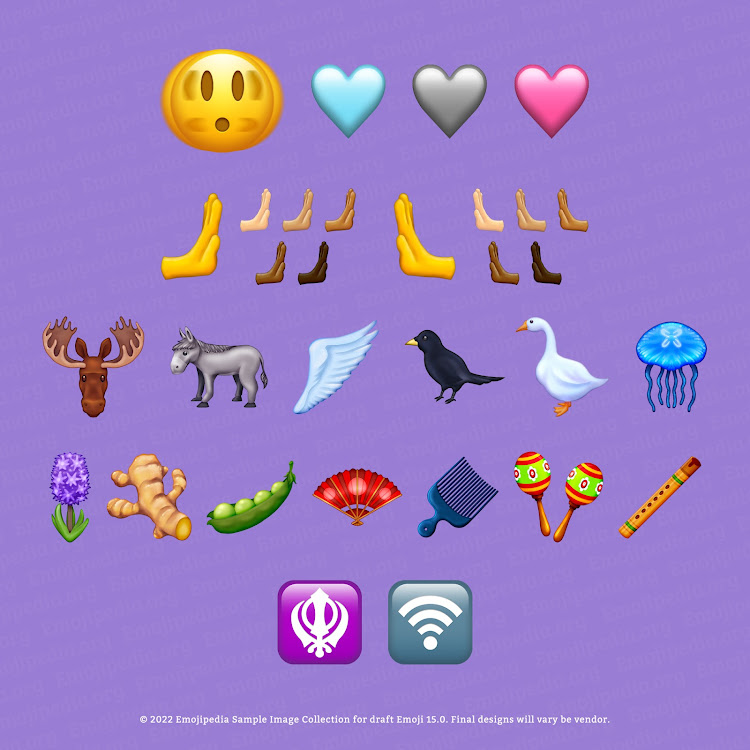 Emojipedia has released draft images of the new emojis to be released in September. Ginger, a moose head and a jellyfish are among them.
Image: Emojipedia

A shaking head, a plain pink heart, a hair pick, root ginger, a moose head and a Khanda — the symbol of the Sikh faith — are among 31 new emojis that will feature in the upcoming release of Emoji 15.0.

The release has been scheduled for September, and any draft emoji candidate approved for final release will start filtering onto major platforms from late this year into 2023.

The update will grow the number of emojis to nearly 3,500 next year. The Unicode consortium has recommended the 31 emojis for release, but a final decision is still outstanding.

According to emoji reference website Emojipedia, the actual end designs will vary from those released by major vendors. The proposed emojis are still in draft form, and may change before the final approval in September when version 15 is finalised and released by Emojipedia and Unicode — an information technology standard for the consistent encoding, representation and handling of text expressed in most of the world's writing systems.

Emojipedia documents the meaning and common usage of emoji characters in the Unicode Standard, and has provided some images of what the Emoji 15.0 recommendations may look like once approved.

What your most frequently-used emojis say about your life

Forget grammar and punctuation. You want a pizza nowadays, you send an emoji. Just be careful you don't order a stripper instead
Lifestyle
2 years ago

Images that have been drafted include a light blue and a grey heart, both rightward and leftward pushing hands indicating high fives, a donkey, a wing, a goose, a jellyfish, a hyacinth, a folding hand fan, maracas, a flute, a wireless and a black bird.

According to statistics portal Statista, different skin colours have been available for emojis since 2015. Regional flags came to the service in 2017. Same-sex couples and same-sex families have been available since the first major emoji release in 2010. The 2021 release also included the rollout of nonbinary options and interracial couples.

What emojis appear on people’s phones and social media platforms has been co-ordinated by the non-profit, US-based Unicode Consortium since 1995.

Statista has tracked the history of emojis — see here.

Facebook users will be able to have up to five profiles

SPONSORED | Designed for those who love to shoot videos — and watch them — this device will impress with its pro-grade triple camera and AI-powered ...
Lifestyle
1 month ago