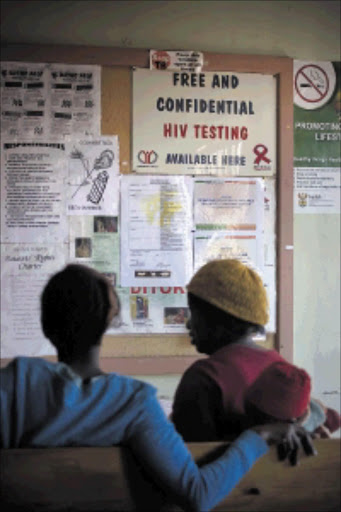 A notice at the Ikhutseng Community Clinic, in Klipgat, North West, claims that the results of HIV tests are confidential Picture: DANIEL BORN

Staff at a government clinic are forcing patients to take HIV tests and those who refuse are denied treatment for their ailment.

At the Ikhutseng Community Clinic, in Klipgat, North West, staff are illegally making treatment for any illness conditional on patients agreeing to being tested for HIV.

They must take the test or go home untreated.

Clinic staff began using HIV tests as passports to treatment after the Department of Health launched its massive HIV counselling and testing campaign in April last year. The campaign was intended to result in the HIV testing of 15million people by the end of June.

After being told it was "the law" to undergo HIV tests, some panicked patients forged information on their files to show that they had been tested.

On Friday, The Times accompanied a teenage girl, who wanted advice on contraception, to her first appointment at the clinic. In five hours in the queue, The Times spoke to patients who all told the same story.

Some patients said they did not object to the compulsory testing because they had not been sexually active for years.

But a 27-year-old mother who had taken her baby for a check-up said: "I have already been tested more than five times since late last year. I was afraid and highly traumatised, and they insisted that they were only following the law. I was left with no choice but to be tested because I needed treatment."

Another patient, speaking on condition of anonymity, said: "If your working neighbour asks you to take her child to the clinic for immunisation, both of you must be tested [for HIV] before the child can be immunised."

A 44-year-old patient with diabetes and high blood pressure said HIV testing was not negotiable: "It is either you take a compulsory HIV test or you go home without any medication."

She claims that she was turned away when she told nurses that she had come to the clinic for her monthly check up, not for an HIV test.

"I was just not ready for it at that moment. They did not hesitate to tell me that 'no HIV test, no treatment'," she said.

She charged that, after the tests, loose-lipped staff revealed the status of patients.

"Say I test positive - before the end of the day the whole village would be knowing that I am positive," she said.

A hawker outside the clinic agreed, saying: "We know who is positive and who is not because the workers here cannot keep a secret."

After five hours in the queue, The Times put the patient's allegations to the nurse in charge, Sister R Makgatho, who refused to reveal her full name. She denied that her staff forced patients to undergo HIV tests and referred queries to the health department's district office.

It was at that point that the teenaged girl we had accompanied to the clinic was refused contraception after declining an HIV test.

"They told me that I will not get any treatment," she said.

Written in her file was: "HCT not done, advice to came (sic) back for follow-up counselling."

"I just do not get it why people were forcing others to take the test," he said.

He criticised the community for telling the media about the problem instead of his department.

"We will send our people to investigate," he said.

Hadebe said clinics were not pressured to test as many people as possible during the testing campaign.

"It was not a numbers campaign . the aim is to inculcate a new culture, to have people know their status and start receiving treatment."

The clinic concerned would be investigated. he said.

"Even if they did not want to take the test, they should be treated for any sickness they have," she said.