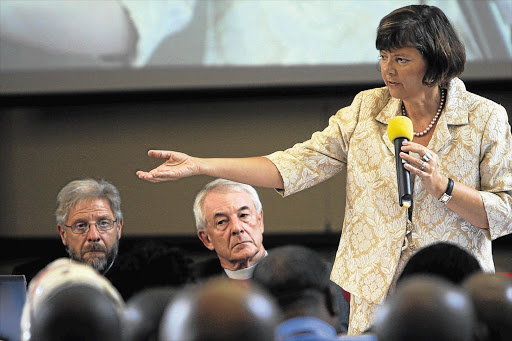 Bishop Paul Verryn, Bishop Peter Lee and Gauteng education MEC Barbara Creecy at the signing of a memorandum of understanding for a partnership between faith-based groups and the provincial government in Johannesburg yesterday
Image: ANTONIO MUCHAVE

The family of slain schoolgirl Keamogetswe Sefularo believes her gruesome death should be a warning of the social ills which haunt young people in the South Africa.

Keamogetswe's brother, Zali Nxabi, yesterday said not even a conviction for his 14-year-old sister's killer would stop the increase in Satanism among pupils.

Keamogetswe, a Grade 10 pupil at Lukhanyo Secondary School in Randfontein, on the West Rand, was stabbed and killed on March 1 by a 15-year-old girl believed to be her school friend.

She will appear at the Randfontein Magistrate's Court on March 26 on charges of murder.

Ten pupils were suspended from the school for "participating in harmful religious practices" four days after Keamogetswe's death.

Although the Gauteng department of education has no statistics on satanic-related incidents in schools, MEC Barbara Creecy said a partnership with various faith-based organisations would, among others, help fight the prevalence of Satanism and harmful religious practices among pupils.

"Social ills from outside are finding their way into our schools. We are now taking a stand . being proactive, and will not only react to tragedies like before," said Creecy.

The partnership, known as the Faith for Quality Education, has resulted in the creation of a handbook - which will soon be piloted at the Randfontein school - to guide teachers and religious leaders dealing with pregnancy, gangsterism, drug abuse, bullying, and parental and community involvement.

The body's steering committee chairman, Bishop Peter Lee, said they would use the pulpit to promote the cause of quality education.

"We only have to add the words 'make sure your children get to school', or 'check if they brought home any homework', to get a sense of what difference we might make with relatively little tuning of what we already do," said Lee.