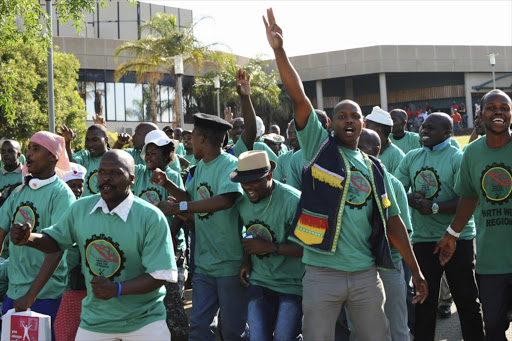 Lonmin is fully committed to concluding a new recognition agreement with the Association of Mineworkers and Construction Union (Amcu), a spokeswoman said on Wednesday evening.

"The company is striving to reach an agreement which is in the best interests of all of its employees, and has made reasonable offers in discussions with Amcu in an attempt to achieve this," Sue Vey said in a statement.

"There is no agreement at the moment, and we are therefore continuing to pursue an amicable settlement."

She said the mining company would continue to hold talks with the union.

Following an SABC report that Amcu would serve Lonmin with a notice of intention to strike, Vey said the company had not received such a notice.

"The company will act in the interests of employees to prevent a strike," she said.

"We reserve our rights and will consider all options to ensure operational continuity and financial viability in the interests of all stakeholders, including employees' jobs. We remain confident that an agreement can be reached through continued negotiations."

Amcu vice president Jeff Mthahmeme was not aware that the union intended serving notice of its intention to strike in an organisational rights dispute with the National Union of Mineworkers (NUM).

He said he was trying to get information on the matter.

Uasa was also unaware of the possible strike notice, said spokesman Franz Stehring. The last his union had heard was that arbitration in the dispute was set for June 26.

"We have not been notified that the notification has been issued."

It was not possible to have a protected strike until the arbitration process relating to a dispute had been completed.

Section 22 of the Labour Relations Act stated that if a dispute was unresolved, the next step could be either arbitration or protest action.

"The specific document we have received from the mine and the [Commission for Conciliation, Mediation, and Arbitration] refers to arbitration," he said.

"If they give notice, it would be an illegal strike and would jeopardise the security of its members," he said.

NUM spokesman Lesiba Seshoka said the union would not be informed of such a notice, but the last word it had was also to do with the arbitration.

If there was a strike, it would be unprotected because of the arbitration date, he said.

The matter went to arbitration after Amcu tried to extend its organisational rights to all Lonmin offices.

It is also seeking the right to collectively bargain for employees in collective bargaining forum two where, according to the arbitration notice, it does not enjoy majority support.

Solidarity, the NUM, and Uasa represent workers in that forum.

Amcu already has 70 percent representation in bargaining forum one, which includes rock-drill operators and miners.

It also wants to bring forward the implementation date of the next round of wage agreements, from October 1 to July 1.

On May 14 and 15, Amcu members went on strike, reportedly because the NUM would not vacate a union office. The unprotected strike ended on May 15, after Lonmin obtained a court interdict.

Deputy President Kgalema Motlanthe will meet parties in the mining sector -- including unions and the Chamber of Mines -- on Friday.

His spokesman Thabo Masebe said that Motlanthe had met unions and the chamber in the past two weeks. He was recently appointed to head a mining sector task team.

At Friday's meeting they would commit themselves to conduct their affairs within the law and within the Labour Relations Act. They would also discuss what steps needed to be taken to stabilise the mining sector.

Thirty-four people were shot dead in a clash with police during a strike at Lonmin's Marikana platinum mine on August 16.