Anger at Zuma grows as Mandela laid to rest 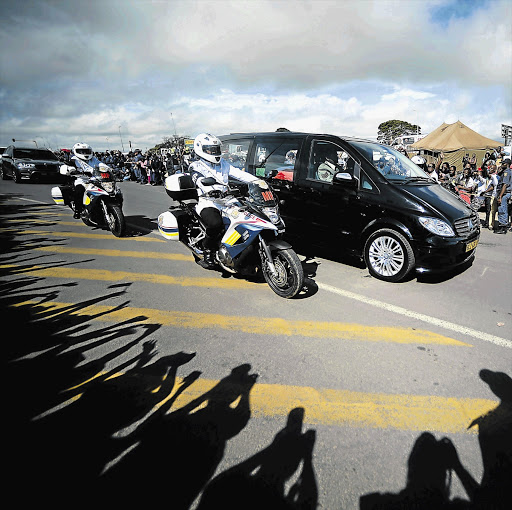 The hearse carrying the coffin of Nelson Mandela drives through Mthatha yesterday on its way to Qunu, where he will be buried today. Thousands of people lined the streets of the city to catch a glimpse of the funeral cortège Picture: AFP

AS the nation lays Nelson Mandela to rest this morning, pressure is mounting on President Jacob Zuma to step down.

In a week in which Zuma suffered the humiliation of being booed by ANC supporters in front of world leaders at Mandela's memorial service on Tuesday at FNB Stadium, an exclusive snap survey commissioned by the Sunday Times revealed that:

To add to Zuma's woes, his predecessor, Thabo Mbeki, weighed in on the debate this week, telling a UK television network that the president should consider resigning if recalled by his party.

Asked by the interviewer whether he would encourage Zuma to follow his example and step down, Mbeki said: "I would hope that if similar circumstances arose and confronted President Zuma, that he himself would think not about himself but think about the country, the people. What is it that would be in the best interests of the people? I think that would be the honourable way to respond."

Mbeki was recalled by the ANC from office in 2008 after being defeated by Zuma at the ANC's elective conference in Polokwane, Limpopo, in 2007.

Mbeki said there was increasing frustration among ordinary South Africans about corruption and the direction South Africa was taking.

"So when they look at some of the things that are happening ... when they see this corruption in the country, which seems to be increasing at all levels of government, the people are aggrieved. They are saying but this is not what freedom was for," Mbeki said.

Zuma's spokesman, Mac Maharaj, and ANC spokesman Keith Khoza refused yesterday to comment on Mbeki's remarks. But, speaking at the official ANC sendoff ceremony for Mandela yesterday morning at Air Force Base Waterkloof in Pretoria, Zuma warned his detractors not to use the struggle icon's name "to settle scores".

"I'll be very happy if, as we mourn and celebrate Madiba, we do not abuse his name. Mandela never abused his membership and his leadership in the ANC. We should not think that Madiba's passing on is a time for us to indirectly settle scores," Zuma said.

In what could be seen as a response to Mbeki's assertion this week that the country needed to raise the leadership bar, Zuma said Mandela would not talk about other leaders behind their backs: "He did not use his talent to talk to you indirectly or through innuendos. He talked to you directly."

According to senior government officials involved with tomorrow's official unveiling of a Mandela statue at the Union Buildings, extra security measures are being taken to prevent disruptions and ensure no further booing.

The deployment of police officers in the crowd will be among some of the security measures.

Despite the signs of growing discontent with Zuma among the party's traditional voters, senior ANC leaders dismissed claims that he was losing the confidence of his supporters.

ANC national executive committee member Enoch Godongwana said he believed that the booing at FNB Stadium had been orchestrated and planned by the ANC's political rivals.

"My sense is that whoever planned it ... did it ahead [of time] and occupied certain positions at the stadium, which was a conscious effort," said Godongwana.

He said the booing was not an indication of major dissatisfaction with Zuma's leadership by ANC members. He said ANC members would not have chosen Mandela's memorial service to boo Zuma.

"The conduct of those who did that on Tuesday was not only directed at the president, but at the image of the country. The choice of the event ... their choice of the venue and the timing is unacceptable.

His views were echoed by ANC veteran and fellow NEC member Pallo Jordan, who described the behaviour by the sections of the crowd on Tuesday as an affront to the country.

"I think the whole country should be worried, because while it might border [on] an insult to Zuma, it was an insult to the country and the nation."

Deputy speaker of parliament and NEC member Nomaindia Mfeketo also defended ANC members, saying a finger should not be pointed at them for the booing incident.

"The president and the leadership have got nothing to worry about. It cannot be ANC members. We have a way of dealing with issues and people know that very well, from branches to regions," she said.

Political analyst and vice-chancellor of the University of the Witwatersrand Adam Habib said it was clear that Zuma was under pressure and that the party was faced with a difficult choice.

"In the ANC you have two challenges - the first is forcing him to resign. If you do, you run the risk of splitting the organisation further," said Habib.

"On the other hand, if you don't force him to resign, you tarnish the reputation of the ANC even further.

He said even with Zuma as its candidate, the ANC would still win the elections - "not because blacks won't vote for a white candidate. It's because there is lack of capacity from the opposition."

Zuma will lead more than 4000 mourners this morning at Mandela's funeral service in Qunu.

The ceremony is due to begin at 8am inside a massive white marquee erected on the grounds of the Mandela homestead.

About 26 heads of state and foreign dignitaries - including Britain's Prince Charles, US television mogul Oprah Winfrey and US civil rights leader Jesse Jackson - are expected to be among the mourners.

At about 10am, family members and a few selected dignitaries will move from the marquee to the burial site. The other guests will stay behind in the marquee.

The burial itself - when Mandela's coffin is lowered into the ground - will not be televised, according to the Mandela family's wishes.

You can see an Excel spreadsheet of the survey's findings here.