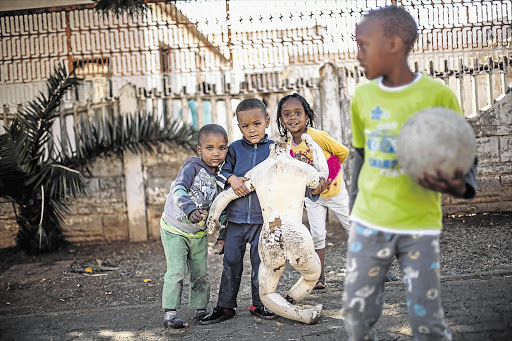 WHAT SORT OF FUTURE? At play in Eldorado Park, southern Johannesburg. Residents say drugs use is rife in the area and police are not doing enough to fight it
Image: DANIEL BORN

A desperate mother is calling on President Jacob Zuma to send the army to Eldorado Park, southern Johannesburg, to end the drugs epidemic there.

The last time Dereleen James wrote to Zuma he visited the area with a "multi-departmental task team" and promised to deal with the problem.

She wrote to Zuma in a desperate attempt to find help for her addicted son. Now, 14 months later, James has written to the president again.

"Our children are in and out of jail, hospital and rehabs. For how long should we mop up while the drug dealers' taps are wide open????," she wrote.

"We need order to be restored in our homes, schools and communities."

James said her son was once again on drugs despite Zuma promisingin May last year that then Gauteng premier Nomvula Mokonyane would help get him into rehabilitation.

"They suggested that we send him to Magaliesoord Treatment Centre but I [had] done this before and it didn't help. She [Mokonyane] never followed up," said James.

Magaliesoord is a government-run rehabilitation hospital.

Mokonyane, now minister of water and sanitation, yesterday said she still wanted to help James's son but claimed his mother had not been cooperative.

"This is not a battle won overnight and the parents need as much support as the children," she said, adding that many drug-addicted children in Eldorado Park had been helped.

Zuma had promised to provide better rehabilitation, to amend the law if necessary, to tackle druglords and to investigate allegations of police corruption.

He also spoke of building factories in the area to alleviate poverty. No rehabilitation facilities or factories have been established.

The president's visit brought about an increase in police visibility and drug-related arrests. But a year later Eldorado Park is back to square one, residents say.

"The [drug dens] are still here and we need that police visibility back," said a drug counsellor who asked for anonymity.

The chairman of the Eldorado Community Policing Forum, Victor Olivier, said that though drugs continued to be a problem, the incidence of some crimes, such as house robbery and burglary, had dropped .

"We have a problem, particularly with kids who are repeat drug offenders," he said.

Nino Zama, a spokesman for Gauteng Premier David Makhura, said yesterday that the province's drug problems continued to be given high priority.

"It is a growing problem across the province," Zama said.