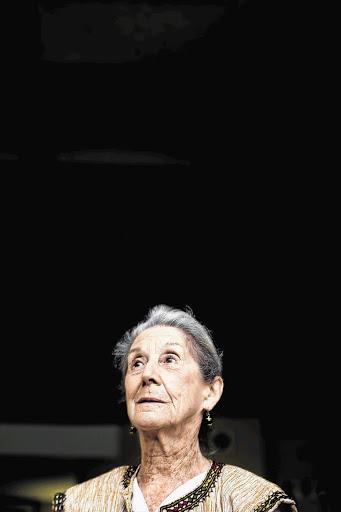 When Nadine Gordimer gets worried, there is probably cause to worry.

The Nobel laureate has been an acutely sensitive barometer of South Africa's moral and intellectual pressures for seven decades.

Now 90 - but as critically engaged as ever - she sees the Protection of State Information Bill as a frightening threat to the freedom of the national mind.

"The reintroduction of censorship is unthinkable when you think how people suffered to get rid of censorship in all its forms," she said in a recent interview.

"And the fact that it's called the Protection of State Information Bill is very disquieting. State information belongs to all of us - this is our right under the constitution. This has got nothing to do with betraying the safety of the country.

"There are plenty of provisions to prevent that - our 'military secrets' are not going to be revealed when they shouldn't be. And, in a way, why should we have military secrets unless we have some terrible weapon that we're about to launch? I don't see which other country threatens us," said Gordimer.

"It's such a contradiction, because we've got one of the best constitutions in the world, but we seem unable to bring it to real fruition ...

"We see these extraordinary circuses, these dinners and banquets, and the stories are published side by side with news of collapsing houses and all the problems in our schools. Who can believe that we don't have textbooks delivered on time or sufficiently?"

Gordimer regards a vigorous South African art scene as an invaluable guard against the threat of authoritarianism. With auction house Strauss & Co, she funds the annual Reinhold Cassirer art award.

Now in its fourth year, it gives a residency each year to a young, unheralded visual artist to work alongside established peers at the Bag Factory in Newtown, Johannesburg.

The award is named after her late husband, an art dealer. They were married from 1954 until his death in 2001.

This year's scholarship was awarded to Thato Nhlapo, a 24-year-old painter and printmaker from Heidelberg and a graduate of the Vaal University of Technology. His work examines the history and psychology of his home township, Ratanda. He creates impermanent street art in abandoned spaces in the settlement that echoes the transience that defines the place.

For Gordimer, the democratic era has been marred by a deep neglect of such poetic impulses.

"Literature and true literacy have taken a back seat. We need it to pursue all branches of knowledge. We've had a fairly lively literature - and it still appears all the time here and there - but it's threatened if your novel or story or play may indeed fall under the category of an anti-government thesis.

"I had three of my novels banned and I'm not alone in that. By 1994, it was all pushed over the cliff and we wouldn't be haunted by it any more. It was such a shock, but we got used to it - and now this bill threatens to bring back one of the great features of apartheid.

"And I hope [the press] won't lose interest because that's what the government wants ... It goes on and on: 'Oh, the president has signed it, but it's still got to be looked at by the National Council of Provinces and then it has to be signed by the president again, and now it's been sent back to parliament.'

"So what are we waiting for? We have to watch it! Fight it!"

Gordimer is heartened by the robust debate in public life: "I think there's a great deal of dissent in people's minds. We have to start thinking again about what democracy is and of certain forms of decay that have got into it. "

A recent US report claimed that she was ready to quit writing fiction. She dismisses the thought with a flash of regal indignation.

"Oh, no! I can't imagine who said that. But you know, I have written 15 novels. And I'm now old and I have to think very carefully. I don't want to let myself down, so to speak. I have certain standards for myself - certain feelings of pressing on from what I've written before. And when that fades away, as it must, quite soon, I will stop writing ... fiction, anyway."