Students protest at University of KwaZulu-Natal 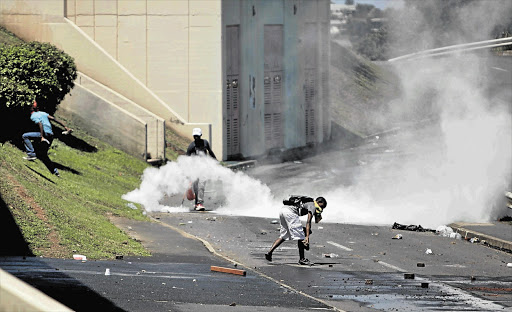 University of KwaZulu Natal students in Westville recently engaged in violent protest in the residents' section of the university.
Image: TEBOGO LETSIE

Student protests erupted at the University of KwaZulu-Natal's Westville campus on Wednesday afternoon.

Registrar Convy Baloyi said about 200 students marched through the campus. There were some reports of lectures being disrupted.

The police had been called in along with the university's security personnel were monitoring the situation.

"The university is unaware of the reasons for the illegal protests as these individuals have not raised their concerns through the correct channels," Baloyi said.

Clive Read, a former SABC cameraman who lives near the campus, reported: "Sounds like fun and games at UKZN Westville. Shouting, then doef, doef, then silence."