Knysna on its knees: As fires continue to blaze‚ town battles with power‚ water and communications 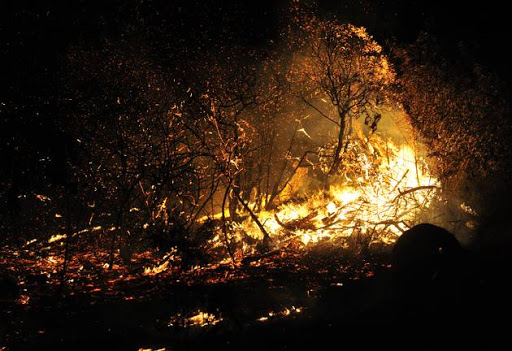 Knysna was reeling under a quadruple whammy of disaster on Friday: on top of devastating fires‚ it has limited water‚ electricity and telecommunications.

“It was already one of the Western Cape towns most impacted by the current province-wide water shortages — and supply has now been severely impacted by fire damage‚ and related power failures‚” said local government and environment MEC Anton Bredell.

Urgent steps were being taken to restore essential services to the areas affected by this week’s storm and devastating fires‚ he said.

Engineering teams would be attempting to power the water network with generators – including waste-water systems‚ to reduce the possibility of pollution.

Condolences have been flooding in on Friday morning at the news of volunteer firefighter Bradley Richards passing away.

“People are requested to use water carefully and sparingly‚ to prolong the availability of water in the town‚” said Bredell.

Eskom hoped to restore electricity to the local grid‚ but the municipal supply network had been severely damaged.

Urgent steps were being taken to identify fallen powerlines or other threats‚ before the electricity supply could be fully restored. “The public are cautioned to take extreme care in the vicinity of exposed electricity cables or infrastructure – especially in water-logged areas‚” said Bredell. Telkom partner OpenServe said the Knysna telephone exchange was up-and-running‚ but the Telkom network was being hampered by power failures and damaged infrastructure.

Around 300 telephone poles had been burned‚ and replacements were being sent from other parts of the country. Approximately 15km of fibre-optic cables were also damaged‚ as well as copper cabling.

A pregnant mother‚ her husband and their three-year-old son have been identified as victims of the wildfires on the Garden Route.The Herald confirmed ...
News
4 years ago

While communications networks were restored‚ CapeNature had partnered with emergency services to establish radio communications between teams on the ground.

Bredell extended condolences to the family of firefighter Bradley Richards‚ who died after sustaining injuries to 70% of his body while volunteering for the local Fire Protection Association and Bitou fire department.

“Each fatality is a new tragedy‚” said Bredell. “We do what we can to prevent tragedies like this but the nature of these incidents are serious and often life-threatening. We are thinking of the emergency services personnel still in action‚ especially following the latest tragedy.”

Another firefighter is in hospital with 50% burns as emergency response teams continued to tackle fires around Knysna and Plettenberg Bay.

Bredell said between 3‚000 and 4‚000 people remained displaced. Some evacuated areas had been declared safe and people had been allowed to return home.

“In areas that have not been declared safe‚ people will not be allowed to return till the situation is safe‚” said Bredell. Water-bombing of fires continued on Friday morning. “The area is on high alert for possible flare-ups of the fire‚ with Saturday’s weather indicating a high fire risk danger. “The public is urged to take great care of potential fire flare-ups – and use great vigilance if entering burnt areas‚ under the impression that the fires are fully extinguished‚ which may not be the case.”

The emergency response has been co-ordinated at the Western Cape disaster management joint operations centre at Tygerberg hospital. The JOC included representatives from more than two-dozen agencies. “The effort was massive‚” said disaster management chief Colin Deiner. “But it’s not over yet. We urge people to be extremely cautious in the damaged areas‚ and be aware that the fire could flare up again.”