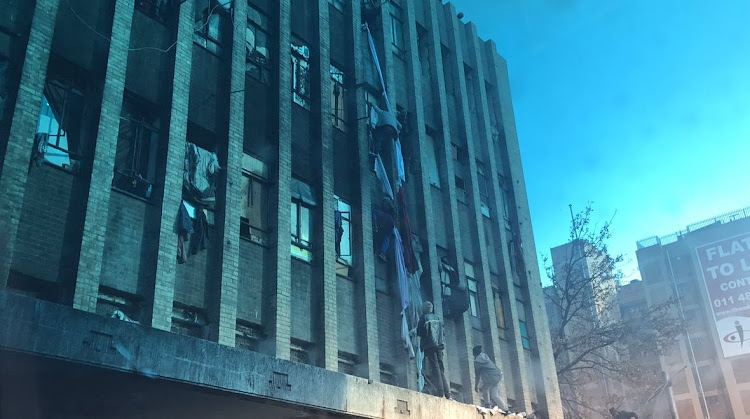 Blankets and sheets tied to what used to be metal window frames painted a stark picture of the desperate measures residents were forced to resort to in a bid to escape a fire at a building in the Johannesburg CBD on Wednesday morning.

While the flames had since been doused‚ small plumes of smoke still billowed from the burnt building.

The degradation of the inner city of Johannesburg has been a headache for city managers for at least 15 years as many buildings – some estimate it as ...
News
4 years ago

Every so often‚ young men came out of the charred building‚ carrying pieces of scrap metal‚ supposedly for trade. Shortly before 1pm‚ police officers began taking out the bodies of the six people who had died in the morning blaze.

A seventh person died after jumping out of the burning building.

It is still unclear what sparked the blaze. Some people suspect that the incident was caused by a candle that had toppled over‚ while others suspect that it could have been sparked by someone who tried to make a fire to keep warm.

A timeline of the Cape York inferno

Johannesburg Emergency Services (EMS) spokesperson Nana Radebe gives a timeline of events that occurred when the fire broke out.

8.49 am: EMS receive a call of a fire breaking out at the building situated at the corner of Jeppe and Nugget Streets.

9.15 am: More than 50 people are rescued from the burning building and are taken out with step ladders.

9.30 am: Seven of the rescued people are taken to Charlotte Maxeke hospital for smoke inhalation. Two of those were taken to be treated for injuries after jumping off the building.

11 am: A search and rescue operation is conducted to check if anyone is still trapped inside the building.

Radebe said the cause of the fire was not yet known.