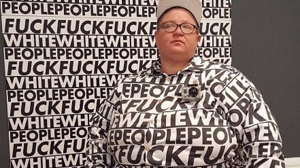 A controversial exhibition titled "F-k White People" has been found by the Equality Court to be an expression of art as opposed to hate speech.

Earlier this year there was a furore over the artwork‚ on display at the Iziko South African National Gallery in Cape Town. Men wearing Cape Party T-shirts covered up the installation with a banner saying "Love thy Neighbour".

The artwork had been loaned to the gallery as part of an exhibition titled "The Art of Disruptions".

Cape Party leader Jack Miller‚ whose party is calling for the independence of the Western Cape‚ denounced the artwork as hate speech and attempted to have artist and University of Cape Town fine arts Master's student Dean Hutton fined R150 000 and forced to apologise.

But the Equality Court‚ sitting at the Cape Town Magistrate's Court‚ ruled otherwise on Tuesday.

In his judgment‚ Chief Magistrate DM Thulare said if there was one thing the work had achieved‚ it was "to draw South Africans to a moment of self-reflection".

In his view‚ the words‚ properly contextualised and understood‚ conveyed the message: "Reject‚ confront and dismantle structures‚ systems‚ knowledge‚ skills and attitudes of power that keep white people racist."

The Cape Party referred to the Oxford dictionary definition of the word "f-k" in their argument‚ but this was rejected by the magistrate‚ saying that the word had a different context within South Africa.

Thulare found that the words "white" and "people" were not directed at all whites‚ but rather to a system of oppression inherent in "white domination"‚ therefore the display could not be seen as discrimination against all white people‚ he said.

Miller said in a statement issued after the ruling: "It is beyond belief that such a simple and obviously offensive statement could be so misinterpreted and condoned in a court of law."

He said that in 1994‚ the government under Nelson Mandela promoted a vision of a Rainbow Nation.

"Today‚ 'F**k White People' is art. Where is this country going?" he asked.

There was mixed reaction to the ruling on Twitter.

"Dean Hutton and 'his' art" 😒😒As far as I know Dean Hutton is gender non-conforming. So this ruling gets only one thing right.

Congrats to Dean Hutton on the ruling. When a respected artist says 'Fuck White People' it is NOT hate speech... https://t.co/dbPAp1KUPr