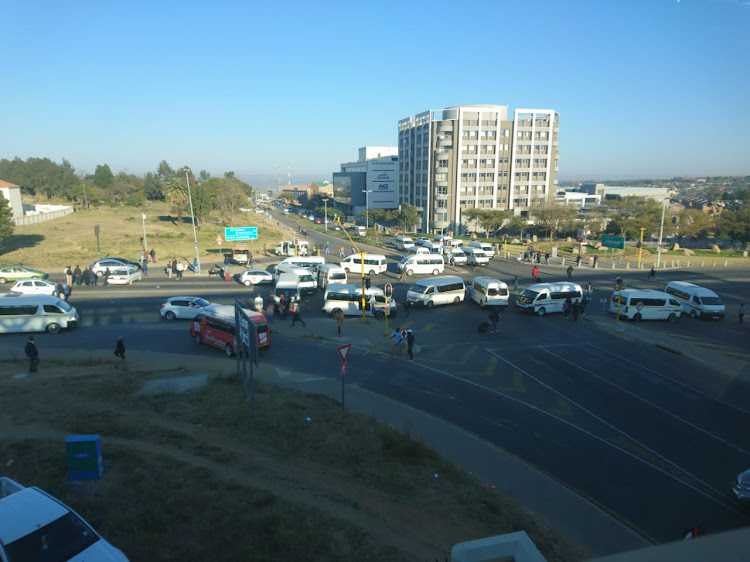 Gautrain Midrand Station come to a standstill last month after the South African Taxi Council embarked on a strike in a protest against the monthly cost of their Toyota Quantum vehicles. File photo.
Image: Abigail Javier

Millions of South Africans can breathe a sigh of relief for now‚ with the planned nationwide taxi strike called off.

Transport Minister Joe Maswanganyi made the announcement on Sunday after meeting with the South African National Council (Santaco) leadership.

The strike was scheduled for Thursday.

The meeting was to address the issues the industry is currently facing.

“We agreed with the industry to put on hold the planned strike‚ to allow for further engagement.

“Both government and Santaco agreed to work together to confront the challenges the taxi industry experiences on a daily basis.”

A nationwide taxi strike‚ which was expected to go ahead on Wednesday‚ has been put on hold.
News
4 years ago

Last month‚ taxi owners and drivers embarked on a go-slow in protest over access to finance‚ a lack of subsidies for the taxi industry and operating permits.

They blocked all of Gauteng’s major highways in a bid to get their message across‚ causing flights from OR Tambo International Airport to be delayed.

The industry threatened to bring the country to a standstill this week if its concerns were not addressed.

Maswanganyi said it was agreed to address issues concerning the taxi industry and that the Transport Department and Santaco would establish committees to deal with the issues.

He said the National Household Travel Survey indicated that taxis were the most preferred mode of public transport‚ which were used by over 68% of the public.

“It is inevitable that the issue of the subsidy for the industry needs to be addressed as a matter of urgency.”

Maswanganyi said government had noted the taxi industry’s “frustrations” around finance‚ with some lending institutions charging 28% interest on their vehicle loans.

“We will involve other government departments‚ including Treasury‚ to explore other possible funding mechanisms.”

Boy Zondi‚ Santaco's second deputy president‚ said it could not be business as usual when it came to challenges the industry faced.

He said: “We call on our members to give these committees a chance.”

He however warned that there needed to be quick resolutions to assist the industry.