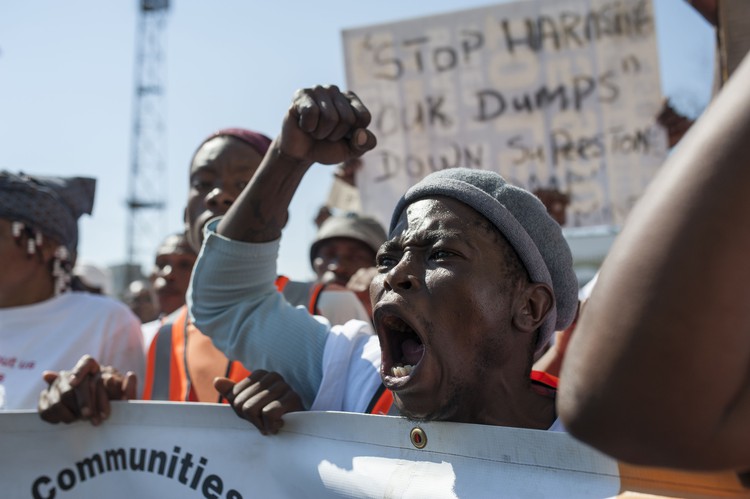 Informal miners, mostly from the Kimberley area, marched on the Department of Mineral Resources in Pretoria on Tuesday.
Image: Ihsaan Haffejee

Hundreds of informal miners‚ known as zama-zamas‚ marched to the Department of Mineral Resources in Pretoria on Tuesday. The miners‚ who mostly work in abandoned mine shafts and dumps‚ demanded the legalisation of their trade and the scrapping of the Mining Petroleum Resources Development Act (MPRDA).

Their memorandum argued that the ban on informal mining in the MPRDA stops them from making an honest living. They come from communities where unemployment is rampant especially among young people. Harassment by mining security and police were two major complaints raised by the demonstrators.

The zama-zamas mobilised under the banner of Mining Affected Communities United in Action (MACUA)‚ an organisation formed in 2012 with the aim of uniting communities affected by large scale mining operations on their land.

Parliament's mineral resources committee has not enthusiastically embraced the prospect of an inquiry into state capture and has been accused by the ...
Politics
4 years ago

Meshack Mbangula‚ the national Organiser for MACUA‚ addressed the protesters outside the gates of the Department of Mineral Resources which were closed and protected by a line of police. “Our minerals are owned by so called investors whose sole aim is to maximise profits and leave the people poor‚” said Mbangula. He said that when communities who lived on the land try to get some of the minerals they were labelled illegal.

“This is our country. These are our minerals. We are the rightful owners of these minerals. We cannot be told by foreign companies that we are illegal in our own land‚” said Mbangula as the crowd of protesters cheered in agreement. Speaking through a loudhailer‚ Mbangula told the miners that the government would always take the side of the large multinational mining companies and that mining communities should unite in the fight for their rights.

Many of the protesting miners travelled from the Kimberley area‚ where they have been mining for diamonds on abandoned mine dumps.

Luckyboy Seekoei‚ the Kimberley chairperson of the zama-zama community‚ explained that artisanal miners in the area are working on the leftover and abandoned dumps left by mining companies. According to Seekoei these companies have extracted huge profits over the years and yet surrounding communities have remained trapped in poverty.

“They have closed the mines‚ saying there is no production. But when we go inside there‚ we always find something which we can use to provide for our families‚” Seekoei said. “We are coming here to demand our basic right. Our right to work. If we cannot work we are not going to survive. If we cannot work then we are going to die.” He called on Minister of Mineral Resources Mosenenzi Zwane to encourage the mining companies to negotiate with the community to find a solution that is fair and sustainable.

Mollie Mooketsi‚ from a town near Kimberley‚ works as a zama-zama in an area close to her home. She said her husband and two sons had been jailed as a result of working as zama-zama miners and she had been left as the sole provider for her grandchildren. “Every day I pick up a hundred buckets of soil. I crush it and then sift through it where we sometimes find small diamonds every few months. We are truly struggling as women‚” said Mooketsi.

Marikana: 'Our brothers did not die in vain'

Beaming with hope‚ mineworker Nelson Zansi‚ is not only in Marikana to mine precious platinum for Lonmin.
News
4 years ago

She was angry with the government for failing to hand over land to her community so that they could work there legally and without the threat of arrest and incarceration. “The government must give us space and those companies must move from our fathers’ land so that we can work nicely and get money to support our children‚ to feed them and put them in school.”

Johan Lorenzen‚ a lawyer who has been working with the zama-zamas from Kimberley‚ said they were facing an interdict from one mining company and an eviction application from another which wants to remove the miners from their homes. The case would soon be heard at the Kimberley High Court.

The memorandum was signed and accepted by a representative from the Department of Mineral Resources who received the list of demands on behalf of the minister. She thanked the protesters for raising the issues and said that she would deliver the memorandum to the office of the minister and to the Director-General.

The protesters gave the department seven days to respond to their demands and vowed to return if they were not satisfied with the response.