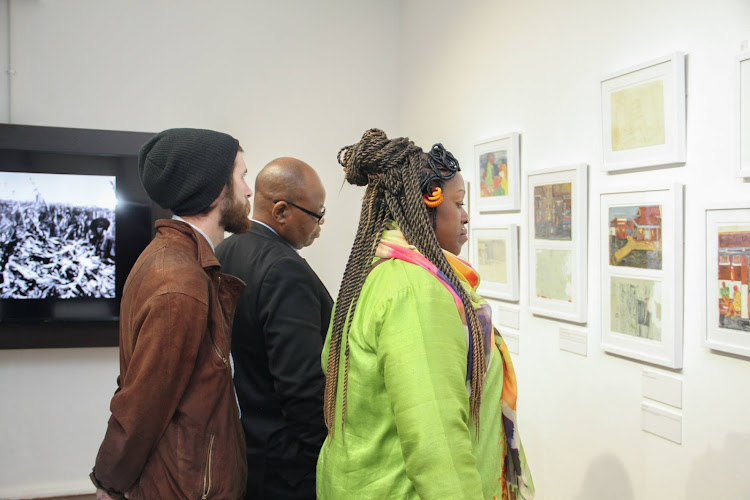 It was a walk down memory lane as the Constitution Hill Old Fort Women’s Jail launched the Prison Diaries exhibition‚ a collection of paintings by the late activist Fatima Meer‚ depicting the conditions which female prisoners lived in.

The exhibition that took place on Tuesday evening in Johannesburg also saw the sale of a book titled ‘Fatima Meer: memories of love and struggle’‚ with a foreword by stalwart Winnie Madikizela-Mandela.

“We were all women‚ but so classified and separated that we could not be women together: we were divided by the impregnable barriers of law and custom‚ in addition race...We were under a common roof‚ enclosed by common walls‚ subjected to common rules‚ but we were different. There were the awaiting-trial prisoners in their own clothes‚ many imprisoned with their children‚” Shamim Meer read from her late mother’s documented diary.

We chat to the Free State artist about his work, his studio and his incredibly large family
Lifestyle
4 years ago

In mid-1976‚ after the student uprising in Soweto‚ eleven women‚ largely members of the newly formed Federation of Black Women were detained under Section 6 of the Terrorism Act and placed in solidarity confinement.

As an escape Meer started making sketches of the cells‚ something that was prohibited. Eventually this was reported to the wardens and her cell was raided in search for them.

“I thanked my lucky stars. Just yesterday I rolled up the sketches and hid them in my underwear and discreetly passed them to our lawyer during consultation. Winnie had taken charge of the remaining paintings and had smuggled them out through a vagaash [black wardress]‚” the daughter read from the book.

Seroke who was a fellow inmate of Meer reminisced about her first day in the cell and how everything she found in it sought to dehumanise her.

They were whoever their parents named them outside but within the confines of the women's jail‚ they were named with codes: LX‚ BJ. LX‚ TH‚ SG‚ OC‚ and so forth.

"My first day when I came into this space‚ I was so naive to think [that] friends are there‚ all is going to be another holiday. It's five o'clock‚ I'm led into this place and I find complete silence. The [kind of] silence that says something to you. You come in; you are stripped off all your belongings‚ your jewellery and handbag‚” Seroke said.

Seroke felt bad when her identity was reduced to a mere number. “I was given a number which up to today I can't remember. I'm let into this cell which later was number two‚ Fatima was somewhere there. I'm shown the instruments‚ a small bucket‚ a huge pot of water and mattress.”

She said that Meer was their pillar of strength‚ she would say “women‚ remember why we are there‚” through the walls.

Seroke is the Chairperson of the Commission on Gender Equality (CGE)‚ a chapter nine institution that was established in the premises that used to be the women’s prison post democracy.

Palmer‚ a fellow prisoner at the time said that the prison is a crowning glory of her freedom.

"I've found a secret, which is that I work without my glasses so everything is kind of blurred," says artist Craig Smith.
Lifestyle
4 years ago

“We conquered this space‚ we walked through this space. We have to get the freedom that we fought for. I say so because we are locked in the townships‚ we might as well be carrying that pass. We enjoyed politicising this jail; we made sure before leaving this prison that every woman [prisoners] has a panty. We were prisoners of the security prison‚ they [prison warders’] would not touch us‚ and we loved that‚” she said humorously.

While reading excerpts from her mother's diary‚ Shamim Meer said that her favourite part in the book is where five women are talking to each other through the walls and day dreaming about cycling to Zoo Lake and mocking apartheid until a warder walks in and it’s back to reality.

The exhibition continues to September 30