Mom tells of agony as she recounts son's mauling 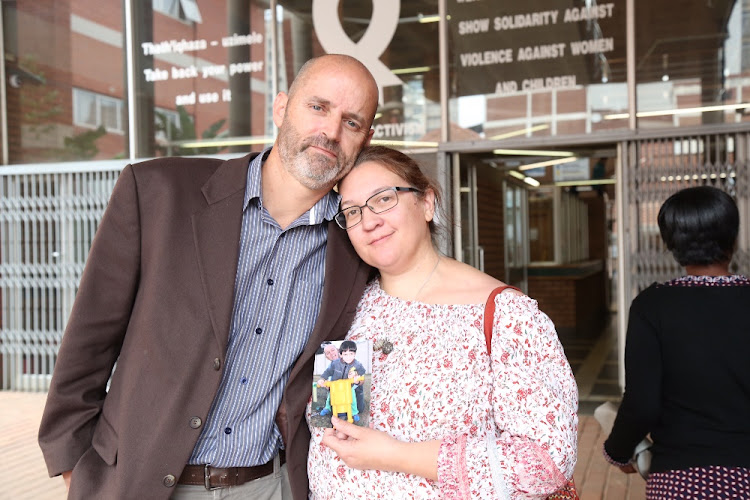 Graydon and Estelle Sinkins who's 8 year old son was mauled to death by neighbours dogs outside the magistrates court innPMB where an inquest is being held into his death.
Image: Jackie Clausen

The moments in which a handicapped KwaZulu-Natal boy was mauled by two escaped dogs - later resulting in his death - will forever haunt the memory of his mother.

Estelle Sinkins told of how she had watched in horror as two dogs‚ which had escaped from her neighbour’s garden‚ had ripped at her 8-year-old son James at their Merrivale home in 2015.

Sinkins was the first witness in a formal inquest into the death of her son‚ heard at the Pietermaritzburg Magistrate's Court on Monday.

Sinkins recounted that her son had been playing in their garden when two dogs‚ belonging to her neighbour‚ had crawled under their perimeter fence and attacked her son.

With mental and physical disabilities‚ the slight boy was extremely vulnerable‚ she said.

"Men will always have power and no matter how we women try to be equal with them we will never be equal."
News
4 years ago

"It's a sight that will haunt me for the rest of my life. My neighbours' black wolf-like dogs were attacking James...one had bitten him around the neck and the other had a hold of his leg and they dragged him‚" she said.

She managed to scare the animals off after she rushed to her son's aid.

"I bent to pick him up and he was whimpering. I looked into his eyes and he seemed to be asking me why‚" Sinkins said.

He had suffered bite wounds on his neck and deep gaping wounds to his thigh.

She rushed her son to a hospital in Howick and after being treated and transferred to a more specialised facility in Pietermaritzburg he underwent surgery‚ and later died.

Bullet fired in shop row hits child in the head

A stray bullet fired as two men argued inside a shop hit a 12-year-old boy in the head while he was buying groceries in Nelson Mandela Bay.
News
4 years ago

She said that she held her neighbours‚ Shanaaz and Aslam Akkadian‚ responsible for her son's death.

Sinkins testified that their dogs had previously killed her cat and her dog in two separate incidents.

She added that she had told the pair that if they failed to do something about the animals‚ she worried that they might kill her son.

The hearing is expected to continue on Wednesday.