Tambo’s statue is a ‘soft vengeance’‚ says his son 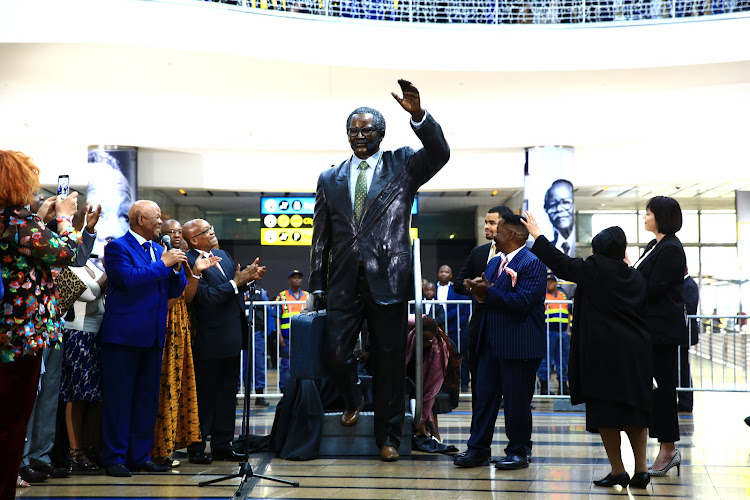 President Jacob Zuma, with the Tambo family and officials, unveiled a life size statue of OR Tambo at the international arrival section of the OR Tambo Airport in Kempton Park.
Image: SIMPHIWE NKWALI/ SUNDAY TIMES

A statue to honour the heritage of Oliver Tambo is a “soft vengeance” on the apartheid government and others who tried to “airbrush” him out of history.

So said the struggle stalwart’s son‚ Dali Tambo‚ on Thursday‚ after the 2.5m bronze statue was unveiled at the international arrivals terminal of OR Tambo International Airport in Ekurhuleni. The statue depicts Tambo descending the last two steps from an airplane onto the runway with his suitcase.

“You remember him as a nation. You remember him and store him in public memory. It’s a sort of soft vengeance to say to all those who preceded us‚ all of the freedom fighters and our leaders who are now up in heaven that we will remember you despite their attempts to airbrush you out of history‚” Dali Tambo said.

Artists Kgaogelo Mashilo‚ Paballo Majela‚ Zelda Stroud and the Sculpture Casting Services foundry started work on sculpting the statue in May this year.

“In 50 years‚ in 100 years or 300 years‚ when many of us have forgotten what these people look like‚ when they are pages in a history book‚ they will still know what OR looked like‚” he said.

President Jacob Zuma also unveiled a bust of Tambo and officially renamed the auditorium and tower of the Air Traffic and Navigation Services (ATNS) at the airport after Tambo.

Zuma quoted former president Nelson Mandela’s speech from Tambo’s funeral in 1993 to describe Tambo: “I say that Oliver Tambo has not died‚ because the ideals for which he sacrificed his life can never die.”

Rivonia trialist Andrew Mlangeni‚ ANC treasurer general Zweli Mkhize‚ Minister of International Relations and Cooperation Maite Nkoana-Mashabane and Minister in the Presidency Jeff Radebe were among the dignitaries who attended the unveiling.

Photographs and a timeline of Tambo’s achievements are being displayed on columns around the airport. One quote displayed on a column is from a city council volunteer describing Tambo on the day he returned from exile. “This is the man who kept the ANC fires burning throughout the world when they were being extinguished in South Africa. This is the man we have been waiting for!” he said.

Transport Minister Joe Maswanganyi said the photographs and quotations would be changed biannually.

The unveiling of the statue is part of the centenary celebrations of Tambo’s life. Tambo was born in 1917 in Nkantolo near Mbizana in the Eastern Cape and was one of the founding members of the ANC Youth League in 1944. He was elected to the ANC national executive committee in 1948. He went into exile in 1960 and became ANC president in 1967 after Walter Sisulu died. Johannesburg International Airport was renamed OR Tambo International Airport in 2006.