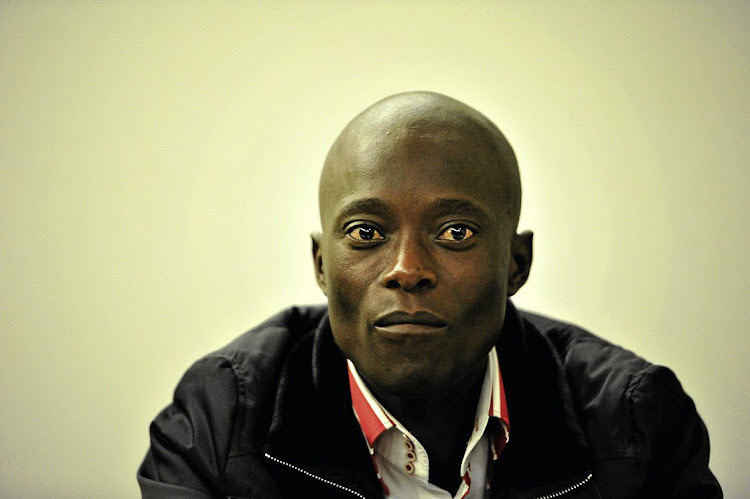 Former ANCYL secretary-general Sindiso Magaqa. The former KwaDukuza mayor, Siyanda Mhlongo, said that he was prompted by the death of Sindiso Magaqa and a statement by provincial ANC secretary, Super Zuma, to make a contribution to the Moerane Commission.
Image: eratu Maduna/Gallo Images/Foto24

Careerism‚ jobs-for-pals and shoddy educational qualifications were the main turbofans driving political killings and plunging the ANC into a "civil war" with itself.

That was the testimony of Siyanda Mhlongo at the Moerane Commission in Pietermaritzburg on Tuesday. The former KwaDukuza mayor stressed that mainly political killings were the outcome of unqualified public officials‚ a situation that has resulted in a scramble for jobs in a period where the state has become the main employer.

He has placed the blame at President Jacob Zuma’s door‚ saying the ANC has been in steady decline from 2007‚ when he took over.

Mhlongo‚ who was a councillor for 10 years before leaving the ANC to join Cope in 2008‚ said he had been jolted into speaking out about the political killings after the death of former ANC Youth League secretary general Sindiso Magaqa.

"I am prompted by the death of Sindiso Magaqa and an unfortunate statement by [provincial ANC secretary] Super Zuma that there is a Third Force behind the ANC ‘civil war’ and ‘war of chairs’ in the Eastern Cape to make a contribution to the Moerane Commission‚" he said in a written presentation before the commission.

Residents of Glebelands Hostel in Durban have welcomed the arrest of a police officer linked to assassinations at the violence-riddled precinct.
News
4 years ago

Magaqa‚ a proportional representation councillor in Umzimkhulu Municipality‚ in the south of KwaZulu-Natal‚ was shot in July while in the company of two of his colleagues‚ Jabu Msiya and Nontsikelelo Mafa.

Magaqa would later succumb to his injuries and died in September. Msiya and Mafa recounted the fateful day before the Moerane Commission in October. They were followed by the ANC later that month and Umzimkhulu Municipality executive and administration‚ who testified on Monday.

"They blamed a third force. The statement that this was a crime of criminality was not acceptable. We cannot address the killing of a brother being killed that way as just criminality‚" he said.

About five councillors died in Umzimkhulu between April and September this year. Mhlongo said no one had been arrested‚ despite the alarming number of political killings in KwaZulu-Natal.

"This rate of killing was not like this before the early 2000s. Why are we having these killings‚ and no one has been arrested?

"Today ANC leaders cannot act faithfully and honestly. There is much for people to accomplish through the path of politics. You end up getting access to a high level of power. When people politically fight‚ it should be for ideas‚ not positions."

ANC KZN leader to get grilled at political violence commission

Mhlongo‚ who said he was now a social activist‚ argued that the moral decline of the ANC has fuelled corruption.

"The factionalism attracts corrupt elements. The party has downgraded its founding ethical and moral values. The time has come for it to cleanse itself."

He said that individuals in public office needed to have academic qualifications.

"The lack of minimum standards for public officials makes everyone a public official. We've said the absence of academic qualifications lowered the quality of leadership and that a lack of morals also meant officials behaved like gangsters.

"This attracts opportunists. The standards of public representatives have gone down. In all parties‚ any person can be councillor‚ as long as they belong to a faction. ANC councillors are supposed to report back four times a year‚ but that does not happen.

"Even if it means using vulgar intimidation and violence‚ they are ready to kill for their careers. Those with no academic qualification label and denounce civil opponents without understanding the fundamentals of democracy."

The commission continues on Wednesday and the Independent Police Investigative Directorate (Ipid) is expected to present its testimony. Ipid has come under fire for not investigating police members implicated in the political and hostel hits‚ particularly at Glebelands.

The ANC cannot be the only party to carry blame when it comes to political killings in KwaZulu-Natal‚ according to provincial ANC chairperson Sihle ...
Politics
4 years ago

KwaZulu-Natal ANC chairman Sihle Zikalala has arrived at the Moerane Commission‚ which is investigating political killings in the province.
Politics
4 years ago

Moerane Commission: Mafa‚ Msiya say they are still being threatened

Prior to their shooting in Ibisi‚ uMzimkhulu‚ councillors Sindiso Magaqa‚ Jabulile Msiya and Nontsikelelo Mafa were systematically excluded from ...
Politics
4 years ago